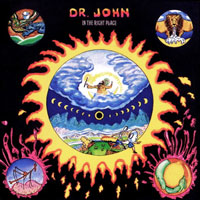 Allen Toussaint is one of those names people know, but don’t know why. One of the enduring figures of the New Orleans music scene, he got his feet wet in the late ’50’s as a session man for the likes of Fats Domino, moving into production and ghostwriting in the ’60’s for soul luminaries like Lee Dorsey and Irma Thomas and penning many of the songs he is (or other people are) known for today. However, it wasn’t until the ’70’s that Toussaint really hit his artistic and creative stride, when he started consistently working with The Meters and releasing records under his own name. Despite penning and producing reams of classic tunes during this period, his name remains one that, while not unknown, isn’t fully understood. The albums below are a handful of our favorite moments, some better known than others, that defined Allen Toussaint and the New Orleans sound in the ’70’s.

Dr. John In The Right Place (1973) Dr. John’s early “Night Tripper” recordings are classics of n’awlins hoodoo spook, fully evoking the hallucinogenic world of the crazed Creole witchdoctor he built his image on. But after four albums of this kind of dark mojo, the Dr. understandably grew curious as to how the other, day-light-dwelling half lived. Initiating this move with the previous year’s Gumbo, Toussaint and The Meters helped bring it all together on In The Right Place, stirring in an extra dose of traditional New Orleans R&B and funk that helps propel and lift the songs in ways he’d never dared before. While the mood is definitely brighter, some of the signature touches of his early recordings remain, like the moody tribal hand-drumming that pops up on the slower cuts. And then there’s that voice – few things exude the charm and menace of the Deep South like Dr. John’s slurred creole growl – a tool no amount of polish can completely neutralize. This one catches the key players of the scene at the height of their powers, bringing the untouchable sound of The Meters and Toussaint’s stellar horn and songwriting arrangements together with one of the more singular voices of their generation.

Labelle Nightbirds (1974) Though they’re rarely mentioned with the same esteem held for their predecessors (Aretha Franklin, The Supremes) or their direct descendants, Labelle effectively built the bridge between the two. Their high-energy, funky modernization of the classic soul/R&B girl group sound looked forward to the disco inferno of Donna Summer as much as it did the unhinged ’90’s diva-isms of En Vogue or TLC. Notable for the presence of the Toussaint-penned hit and calling-card, “Lady Marmalade” Nightbirds is probably their best album through and through, thanks to Toussaint’s spacious production and arrangements and the lithe maneuvering of The Meters in the pocket funk support. Patti Labelle’s move into a more mainstream solo career sometimes overshadows just how great Labelle were for awhile, especially Nona Hendryx, who wrote most of the group’s material and was responsible for their increasingly flamboyant attitude and image. Along with P-Funk, Labelle were at the vanguard of Nubian-space-glam, predicting the outre stylings of Kool Keith, Outkast, and any number of modern Hiphop/R&B divas.

Wild Tchoupitoulas (1976) Tchoupitoulas St. is an ancient New Orleans thouroughfare, named for the Native American Indian tribe who cut it’s original path along the Mississippi as a trade route. The deep history of the name bleeds through this joyful and unique album at every instance, imbuing the proceedings with a real sense of place, and the people who inhabit it. The band was made up of members of The Meters and their extended family – representatives of the nearly-extinct Tchoupitoulas tribe – and produced by Allen Toussaint. In terms of definitive New Orleans records, this ranks with the best work of Dr. John in the way it wholly embodies the spirit of the city, taking the Meters signature groove and riding it through the streets of the Mardi Gras parade without a care in the world. You could be sipping a cup of dirty Mississippi River water and still be in a good mood when the needle drops on this one.

Allen Touissant Southern Nights (1975) Toussaint seemingly gave some of his best stuff away, perhaps having the intuition (and humble nature) to know when a song was just right for someone else. No matter how many times they’re covered in a House Of Blues revue, Lee Dorsey’s versions of “Working In A Coalmine” and “Get Out Of My Life Woman” will always be the definitive ones. However, like any good man-behind-the-scenes, Toussaint managed to hold back some of his best material for himself. All of his solo albums from this period are more than worthwhile, but Southern Nights may be the crowning achievement of his solo oeuvre. The record employs some of the same tools that made his hand in The Meters and Dr. John’s output of the period so evident while side-stepping the confines of the typical soul-funk record, with laid-back, soul-baring deliveries that roll as much as they groove. He filters his vocals through what sounds like a Hammond Leslie on many of the tracks, contributing to the humid, swampy effect of the proceedings, and transporting us into the otherworldly night scene depicted on the cover. Glen Campbell popularized the title track, but Toussaint’s performance of it remains one of the more moving things ever committed to tape, and a convincing, sublime love letter to New Orleans and The South.

The Meters Struttin’ (1970) It would be remiss (and nearly impossible) to write about New Orleans music in the ’70’s without mentioning The Meters own studio albums – though so much ink has already been devoted to this pursuit, we chose not to single one out here. They are the building blocks of all the aforementioned classic albums, and a bunch of other songs you’ve heard and loved without knowing why (it’s The Meters). Struttin’ is a highlight, but it’s hard to go wrong with any of their early ’70’s albums.

Further listening: One of  Tousaint and The Meters’ more interesting appearances proved to be Sneakin’ Sally Through The Alley, the debut of one Robert Palmer. Although remembered for his MTV-era hits (and the models in his videos) of the ’80’s, Palmer was a dedicated dilettante…err, soul man, at heart. Although not quite a classic, The Meters, Toussaint, and Lowell George help make Sneakin’ a pretty compelling look for Palmer, making his white R&B moves as close to natural as he’s likely to get. Not for the faint of heart, Toussaint’s involvement in The Mighty Diamonds Ice On Fire remains one of the more curious entries in either of the aforementioned parties’ repertoires and one of the few known specimens of the ill-fated Reggae-Funk sub-genre to this day. File under: much further listening. — Jonathon Treneff