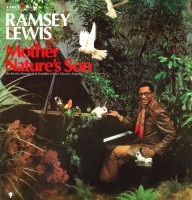 What happens when a black man covers songs on The White Album? Magic, as it turns out. Releasing an LP of 10 interpretations from a record that came out earlier in that year by the blessed Beatles might seem like a crass cash-in, but keyboardist Ramsey Lewis is a helluva classy, exceptionally talented interpreter, and Mother Nature’s Son is mostly fantastic—no matter if it was meant to capitalize on the world’s most popular rock band’s latest opus.

Cadet’s in-house studio wizard Charles Stepney (I highly recommend you especially check out his work with the Rotary Connection) convinced Lewis to record Mother Nature’s Son even though Ramsey was not the biggest Beatles fan. Lewis had covered “And I Love Her,” “Hard Day’s Night,” and “Day Tripper,” but hadn’t been converted into a hardcore Fab Four aficionado. In late 1968, Stepney insisted Lewis listen more deeply to The White Album, and the latter eventually came around—luckily for us.

Bolstered by Lewis’ Moog synthesizer treatments and an orchestra, the soul-jazzed-up instrumental versions on Mother Nature’s Son sound expansive and festooned with baroque ornamentation. Lewis and company blow out Paul McCartney’s spare “Mother Nature’s Son” into a dazzling symphonic tapestry and the unbearable “Rocky Raccoon” is made bearable—see, miracles do happen. John Lennon’s “Julia” is whipped into a creamy, drifting sigh of a piece that soars much higher than his original intimate ballad. “Back In The U.S.S.R.” oozes sophisticated swagger and the drums really bump with what sounds like Bernard Purdie’s funky slaps. Also receiving hot funk injections are “Dear Prudence,” “Cry Baby Cry,” and “Sexy Sadie,” which billow into compositions as grandiose as Isaac Hayes circa Hot Buttered Soul or David Axelrod circa Songs Of Innocence/Experience.

The orchestral confection “Good Night” is a bit too rich for my blood, but “Everybody’s Got Something To Hide Except For Me And Monkey” absolutely scorches; it’s the LP’s most exciting rendition. “Monkey” is among the Beatles’ hardest-rocking tunes, and Lewis transforms it into one of the wildest peak-time party jams the ’60s—a decade famous for its peak-time party jams—has ever witnessed. This version tops the Feelies’, if you can believe it. Album-closer “Blackbird” really elevates and elongates, its melodic contours perfect for jazz virtuosi like Lewis and his mates to extrapolate upon.

Obviously, the raw material of The White Album is mostly superb, but in almost every instance, Lewis and his musicians find ingenious ways to make them even more spectacular—and without a lick of singing. Shame about the absence of “Revolution 9,” though. -Buckley Mayfield