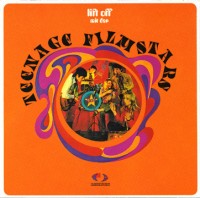 When people talk about the all-time classic shoegaze-rock albums, they often forget about this one. Big mistake. I mean, Star came out on England’s Creation Records, Shoegaze Central, in 19bloody92. It’s hard to get better positioning than that. Plus, it had a fab cover and it was made by Creation boss Alan McGee’s tightest bro from way back when: Ed Ball.

So why has Star virtually vanished into the ether? Why has a work that this writer and a few other friends rank up there with My Bloody Valentine’s Loveless and Isn’t Anything and Ride’s Nowhere eluded the consciousness of the underground-rock cognoscenti? (That shoegaze documentary Beautiful Noise didn’t devote a dang minute to Teenage Filmstars.) One theory: Fellow Creationists My Bloody Valentine, Ride, and Slowdive—and Lush—siphoned so much attention from the music press that they eclipsed almost everyone else. Well, it’s time to atone for mistakes and get familiar with Teenage Filmstars’ fantastic debut full-length. (Props to the infinitesimal minority who already know it by heart.)

From the first seconds of opening song “Kiss Me,” you realize you’re immersed in a special record. Teenage Filmstars fling you into a super-saturated glam-rock alternate universe in which Electric Warrior-era T.Rex is remixed by Kevin Shields. The main riff’s repeated ad nauseam, like an OCD come-on to which you succumb over and over (and over). First song and you’re already spent, but you soldier on because you sense even greater pleasures await you. “Loving” is an idealized simulacrum of Loveless‘ unbearably sensuous, cooing vocals, throbbing guitar miasma, and subliminally thrusting rhythms. It’s a potent aphrodisiac. “Inner Space” out-ethereals those interstitial bits on Loveless and makes Cocteau Twins sound like the Cult. To paraphrase the Jimi Hendrix Experience, it’s got me floating.

“Apple” is a heavenly flange swirl that, if you could condense it into a pill, would erase the world’s pain in four minutes. The gorgeous lysergic reverie “Flashes” boasts the same skittering, funky drums as the intro to MBV’s “Soon,” hilariously rubbing your nose in the Loveless association. The endlessly revving and twittering instrumental “Vibrations” is what I imagine LSD guru Timothy Leary heard as he shuffled off this mortal coil. It always reduces me to acidic tears. The title of “Hallucinations” is a bit too on the nose, but its Möbius-strip synth exhalations and astral turbulence give you what it promises. This cut comes at the part of your trip when you either ascend to a startling peak or descend into a private hell of insanity—those “Time to die” snippets from Blade Runner may make you feel like it actually is. “Moon” closes the album with an end-credits flourish. It’s the most conventional moment on all of Star, and it somehow returns you to a semblance of normality in grand style. Quite considerate of you, Teenage Filmstars.

Cherry Red reissued this shoegaze classic on vinyl in 2010; Artpop! re-released it on CD with three bonus tracks in 2008. In the liner notes to the latter, Ed Ball writes, “Rather than take acid or Ecstasy in the studio, I endeavoured to capture the effect they had on my senses—the misheard, the misunderstood, attention to details in sound not normally given second thought.” Mission accomplished, Ed! -Buckley Mayfield