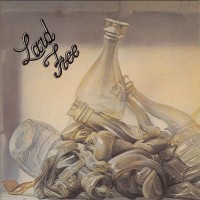 The entire first side is consumed by “Spirale Malax,” which fades in on Yves Lanes’ mutedly radiant synth, which whorl in the vicinity of Terry Riley’s A Rainbow in Curved Air, but soon come the shafts of Xavier Baulleret’s molten guitar and Jean-Pierre Thirault’s spectral clarinet filigree. Artman funnels all of these elements into a massive cyclotron, generating a disorienting vortex of highbrow hijinks. It’s like listening to Tangerine Dream’s Zeit and Iannis Xenakis’ La légende d’Eer while on a Tilt-A-Whirl.

“Spirale Malax” really is one of the most stunning pieces of music ever conceived, a surreal, 17-minute acid trip full of phantom, Doppler-effected drones, trance-inducing tom-tom-thumping, and panic-inducing guitar pulsations. Then it fades out as it came in. Utter, terrifying perfection.

The four-part “Synthetic Seasons” suite on the flipside isn’t as mind-boggling as the A-side, but it’s plenty out there and gripping. It begins with eerie synth ectoplasm punctuated by distant, methodically off-kilter drums and guitar and clarinet that seem to be shrieking in the next studio over. By the second section, the drumming comes to the fore, beating out a military tattoo, while the guitar describes a pattern as complicated as a cauliflower and the clarinet drones mournfully.

The weirdness intensifies in the third part, with a swarming synth drone blooming, until the clarinet mournfully surfaces, like Eric Dolphy in a funereal mood. In the final segment, a seductive and menacing funk beat saunters into earshot, while the guitar grunts and the synth twitters in a melancholy mode (Acid Mothers Temple fans will recognize this combo). The track traverses some of prog-rock’s most anguished terrain, replete with Lanes’ wavering wall of synth grotesquerie. “Synthetic Seasons” could soundtrack Ingmar Bergman’s The Seventh Seal—if it didn’t get so damn funky in places.