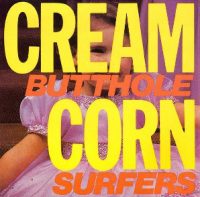 For a stopgap EP released between two mind-boggling LPs, Cream Corn From The Socket Of Davis sure has had legs. Three of its four songs became staples in Butthole Surfers’ live sets and lead track “Moving To Florida” has become the pinnacle of blues mockery/homage among white rock groups. And the title Cream Corn From The Socket Of Davis exists on a whole other level of sacrilegious brilliance, to boot.

Slotted between Psychic…Powerless…Another Man’s Sac and Rembrandt Pussyhorse in the Surfers discography, Cream Corn finds these Texas psychonauts flexing blues, psych-rock, industrial, and country-rock muscles with rude intensity. I’ve heard “Moving To Florida,” a ludicrous send-up of blues-singer machismo, over a hundred times, and it still cracks me up. No, I can’t believe it, either. Most songs that lean heavily on humor begin to pall after a few listens, but “Moving To Florida” has retained its absurdist potency for over three decades. Every line out of Gibby Haynes’ mashed-potatoes-filled mouth—uttered between bursts of spasmodic blues-rock demolition—is a comedic gem. I’m tempted to cut and paste the whole lyric sheet here, but a few examples should suffice. “I’m going to move down to Florida/And you know I’m gonna have to potty-train the Chairman Mao/…I’m gonna grind me a White Castle Slider out of India’s sacred cow/…They be making tadpoles the size of Mercurys down in Florida/That be telling Julio Iglesias what to sing.” Fuck me running, Gibby’s a walking advertisement for the rewards of daily hallucinogen-gobbling.

“Comb” sounds like a Big Black song being played at 16 rpm. It’s a sluggish, brutish slab of disorienting industrial-music waste that you should play for your worst enemy; I mean this as a compliment. “To Parter” begins with the Surfers’—and indeed any band’s—most ominous riff (thanks to mad-genius guitarist Paul Leary), building to a tumultuous, sinister, psychedelic ordeal that makes you feel as if you’re being sucked into a vortex of bilge water. “And all the teachers who were flunkies/They all taught you and me,” Haynes bellows, before he approximates the gibbering and wailing of a dementia patient. “Tornadoes” ends the EP with scathing, speedy punk-rock as played by maniacs, becoming ever more unhinged as the song progresses. You could probably see this sort of finale coming, but that doesn’t make it any less thrilling.

Cream Corn From The Socket Of Davis (did showbiz legend Sammy, the subject of the title, ever hear it, one wonders?) is an essential piece of the crazy puzzle that is Butthole Surfers’ catalog. -Buckley Mayfield