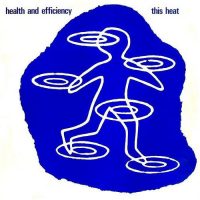 Slotting between the twin towers of This Heat’s 1979 self-titled debut LP and 1981’s Deceit, Health And Efficiency is no mere stop-gap release. Rather, it’s a peculiar peak in this short-lived yet crucial experimental/post-punk group’s discography.

“Health And Efficiency” itself is simply one of the greatest songs ever, an art-rock tune so grand and uplifting, it deludes us into thinking that humanity is going to continue to evolve into a peaceful, super-intelligent species that values equality and yes, health, over all else. Seriously, its melody and ecstatic vocal arrangements are that powerful. Then, two minutes in, This Heat say, “Fuck it, y’all don’t deserve this much euphoria,” as they slam into one of the nastiest (lock) grooves to which you’ve ever had the good fortune to lose your mind and spastically jack your body. It’s a real bucking mechanical bull of a rhythm, cantilevered to the max and laced with an array of rolling bottles, children’s screams, and enough noisy distortion to start a wildfire in your brain. The freakout near the end will tear your ever-loving head off and punt it into the sun (the star to which “Health And Efficiency” is dedicated).

“Health And Efficiency” is a definitive example of what radical explosions can be realized with (mostly) typical rock instruments when the musicians disregard orthodoxy. In the liner notes to the most recent reissue, This Heat drummer Charles Hayward says that the track was “improvised pretty much fully-formed, an 8 minute stretch.” He notes that Charles Bullen plays an electric/upright piano that the Rock In Opposition band Henry Cow left at the Cold Storage Studio through some distortion pedals. Now you know.

On “Graphic/Varispeed,” This Heat revamp “24 Track Loop” from the self-titled 1979 debut album into a supremely resonant, ASMR-inducing drone that the band manipulates ever-so-subtly, so it changes pitch and intensity in minuscule gradations. An early example of remixing and sonic deconstruction, “Graphic/Varispeed” puts a particularly industrial, northern English spin on ambient/drone music.