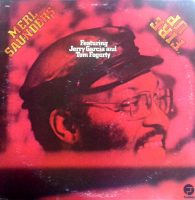 Merl Saunders (1934-2008) was a Hammond B-3 demon and all-around keyboard badass who is best known for his recordings with the Grateful Dead legend Jerry Garcia. In 1973, Saunders, Garcia, Creedence Clearwater Revival guitarist Tom Fogerty, bassist John Kahn, drummers Bill Vitt and Bill Kreutzmann, and others cut a hot LP aptly titled Fire Up. If you’re familiar with Hooterroll?, the record Garcia made with keyboardist Howard Wales in 1971, you may hear similarities between that and Fire Up. Both are great, if under-acknowledged, gems in the constellation of Grateful Dead satellite releases.

Fire Up starts strongly with “After Midnight,” which Merl and company render in the laid-back style of the song’s composer, JJ Cale, but they make it even funkier, with Jerry Garcia exuding his patented mellow bonhomie on vocals and embellishing the heaven out of the main chugging guitar riff. For even more savory flavor,Saunders gets off some mad, rococo flourishes on organ and electric piano. This might be the best version of this oft-covered song, outside of the original. The low-key party atmosphere continues with a suave, soul-jazz treatment of Huff-Gamble’s “Expressway (To Your Heart).” “Soul Roach” is a greasy af boogaloo-inflected jam that sounds like the best shindig you’ve ever had south of the Mason-Dixon line. Saunders brings in an Arp synth and Kahn helps out on extra organ, because that’s how dang generous ol’ Merl was in 1973.

Fire Up peaks on “Chock-Lite Puddin’,” a cruising funk rambler with Saunders on Arp and flute. This has become my go-to cut from this LP for DJing, along with “After Midnight.” Drummer Gaylord Birch and bassist Chuck Rainey really fatten up the groove here, with bonus mercurial hand percussion making “Chock-Lite Puddin’” dance-floor dynamite. The record closes with a nearly nine-minute version of “Lonely Avenue,” as Saunders and crew turn Doc Pomus’ classic, frequently covered 1956 song into a slinky exercise in melancholy R&B, with Walter Hawkins singing and Garcia soloing with soulful dexterity.

Fire Up is a front-to-back solid collection of keyboard-powered songs that surely illuminated many parties throughout the ’70s, and could do so now among folks of a certain age. Plus, if you’re a fan of Jerry Garcia’s spidery virtuosity, you definitely need this in your collection. -Buckley Mayfield