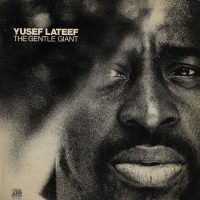 I’m by no means an expert of Yusef Lateef’s music, having listened to only a half dozen of his 60 or so albums. But of what I’ve heard, I find The Gentle Giant to be the most satisfying from start to finish. Please allow me to explain.

Have you ever heard “Nubian Lady”? Now this is how you start an album. Lateef transforms the Kenneth Barron composition into one of the most tranquil and seductive funk jams ever to caress your erogenous zones, thanks mainly to Yusef’s mellow, mellifluous flute and the languidly groovy interplay between three bassists and drummer Albert Heath. I play this track in DJ sets when I want to help everyone in the club/bar get laid. Note: If you can’t woo somebody to “Nubian Lady,” you may want to reassess your whole approach to mating.

The rest of side 1 goes on some interesting tangents from that heady opener. “Lowland Lullabye” is a melancholy flute and cello duet that induces special feelings and “Hey Jude” is that world-historical Lennon-McCartney hit, obviously. As I’ve mentioned before, it was the law in the early ’70s for major jazz artists to cover Beatles songs, and “Hey Jude” may have been the most covered of them all. Which is cool, because it’s a splendid ballad with one of the most uplifting codas ever conceived. Here, Lateef builds it from near inaudibility to roaring climax in the space of nine minutes, beginning with oboe, guitar, and vibes to outline the main melody. As the Sweet Inspirations provide distant, soulful backing vocals (such glorious “NA NA NA NAAAAS”), the band gradually gradually accelerates and intensifies the sound into a veritable Mardi Gras of clangorous chimes, madly soaring oboe à la Roxy Music’s Andy Mackay, and an Eric Gale guitar solo of wah-wah’d majesty. Yusef and company done took a sad song and made it better. Hoo boy, did they let it out and let it in…

Starting side 2, “Jungle Plum” is the album’s dance-floor filler, a sly funk number—another classic written Barron tune—that glides with a gritty sophistication and swings like an elephant’s dick. Lateef’s scat singing and wavy flute fanfares really make this cut stand out. By contrast, “The Poor Fisherman” tempers the celebratory mood with a flute solo of utterly poignant desolation. And it’s hard to discern why Lateef titled “African Song” as he did, because it’s more of a smooth jazz piece of sweet languor and delicate beauty. Whatever the case, it’s a nice cut.

On “Below Yellow Bell,” Lateef’s scat singing verges on the goofiness of Bill Cosby’s in the Quincy Jones track “Hikky-Burr,” but the bells, In A Silent Way-like organ drones, slinky bass line, and understated funky drums and percussion balance out the quirkiness. “Below Yellow Bell” is an engrossing oddity and an unexpected way to end an album.

Yusef Lateef was a strange bird, and he soared high for decades. Pick any record of his and dig in; you likely won’t be disappointed—yes, even with his “disco” LP, Autophysiopsychic. -Buckley Mayfield