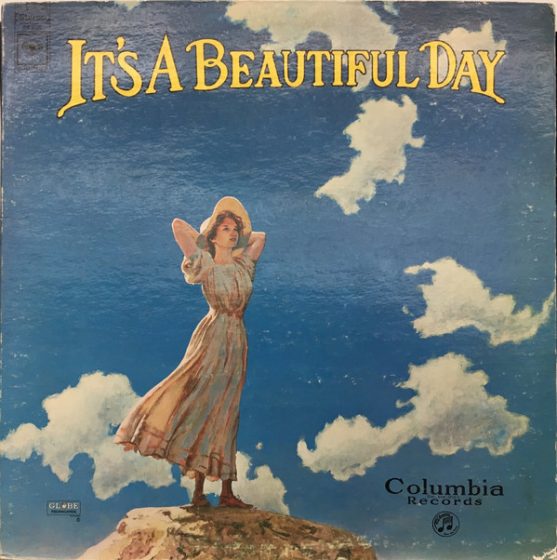 You’ve seen this album in bargain bins a billion times. Maybe the cover intrigues you… or maybe it repels you. Its corny wholesomeness does not exactly promise a wild sonic ride. I shouldn’t have to say this, but don’t judge an album by its cover. It’s A Beautiful Day often soars far above what its packaging suggests.

The story goes that IABD’s manager, Matthew Katz (the notorious jerk who effed Moby Grape, among others), forced the band to move from the Bay Area to Seattle to record their debut album, made them endure penurious conditions during the winter in the attic of a house owned by Katz, and generally engineered a miserable experience.

Yet despite these setbacks, IABD produced an outstanding debut LP that smacks of a certain kind of ambitious hippiedom circa 1969. Orchestral psych-rock, ornate balladry, baroque folk, gritty blues rock—these sorts of things interested major-label bigwigs back then, and the album peaked at #47 in the US. Hence, the ubiquity of It’s A Beautiful Day in 21st-century cheapie bins. Columbia manufactured a ton of it, and the single “White Bird” hit fairly big, but the album just didn’t engender the devotion that some other releases from the era did.

You can understand why “White Bird” struck a chord in the late ’60s: It’s a paragon of mellifluous hippie folk with male/female vocals. However, IABD should’ve made Pattie Santos’ dulcet tones more prominent in the mix and muted David LaFlamme’s plummy croon. Still, the song takes off wonderfully thanks to LaFlamme’s sonorous, soaring violin solo and Hal Wagenet’s glistening, rococo guitar excursion.

At his best, LaFlamme can approach Scott Walker’s deep, velvety expressiveness, as he proves on “Hot Summer Day,” a laid-back reverie not unlike Jefferson Airplane’s mellower moments. By contrast, the anguished blues rock of “Wasted Union Blues”—with its gnarly guitar and violin interplay—verges on the frayed-nerve intensity James Blood Ulmer/Ornette Coleman. Again, though, Santos’ voice should be to the fore.

The tough, Eastern-leaning orchestral psych-rock of “Bombay Calling” was so enticing that Deep Purple lifted its main motif for “Child In Time.” “Bulgaria” conjures a mood similar to that of the Doors’ “Indian Summer” and the Stooges’ “We Will Fall,” but it’s not as eerie. The lines “when you’re in a dream/the time passes so slowly/open up your heart/go to sleep on the moment love was born” epitomize IABD’s infatuation with the cosmic aspects of romance.

IABD save the best for last. The album’s longest song at nearly 10 minutes, “Time Is” embarks on an adrenalized journey to the center of existentialist-rock nirvana. It’s not quite as out-there as Chambers Brothers’ “Time Has Come Today” and Val Fuentes’ drum solo isn’t as impressive as Ron Bushy’s in Iron Butterfly’s “In-A-Gadda-Da-Vida,” but it’s a splendid spectacle nonetheless.