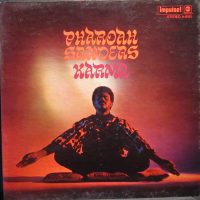 Karma is the Sgt. Pepper’s of spiritual jazz, in that it appeals to both the public and critics on a large scale. Dominated by the nearly 33-minute “The Creator Has A Master Plan,” the album has become a totem of transcendental music, at once approachable and challenging in a rare way. Consider it the ambitious offspring of John Coltrane’s A Love Supreme—maybe even the student who ends up surpassing his mentor.

“The Creator Has A Master Plan” starts with a glorious two-minute fanfare, putting the listener on tenterhooks. Then Reggie Workman fingers the immortal bass line that emulates Jimmy Garrison’s in Coltrane’s “Acknowledgement”; it’s like a trampoline for your soul. Add in Nathaniel Bettis’ shakers and belltrees, James Spaulding’s flute, and Sanders’ saxophone calligraphy (ranging from gently poignant to catastrophically raspy) and you have the beginnings of a momentous trip. When Leon Thomas brings in his sly “yeah yeah yeah yeah yeah”s, you sense things are going to rise to another level. They do.

With his heartfelt lyrics, Thomas outlines the Creator’s basic yet essential blueprint for peace and happiness through all the land, and then embellishes those salubrious words with a series of acrobatic scats and yodels that articulate the song’s theme even more powerfully. Leon truly has too much soul for one body.

The track attains a chaotic peak a bit before the halfway point and then again near 20 minutes; both passages sound like the painful birth of planets that are superior to Earth—and the cries of a panicking elephant herd. They truly are some of the wildest and most transcendent moments in jazz. The last few minutes return to the opening section’s see-sawing bass line, trilling flute, and shiver-inducing belltree/shaker action. Thomas lets off some of his most sublime ululations and hums. He repeats the chorus to the fadeout. You sit there stunned, your life changed forever for the better. Lord—if you’re there—have mercy.

The cumulative effect of “The Creator” is to convince even the most hardcore atheist that just maybe there’s a shred of a chance that the universe is overseen by some god-like authority who has humanity’s best interests at heart. It’s a potent sonic fantasy, for sure. Sanders, Thomas, and company possess the power to make you believe, against your rational mind.

A cornucopia of tantalizing textures and heart-searing melodies, Karma is as essential as the oxygen you breathe and that Pharoah’s blowing through his instrument. -Buckley Mayfield