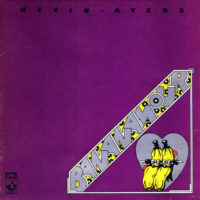 Is this the second-greatest rock album featuring a banana on its cover? Quite possibly. While Bananamour is not quite as important as The Velvet Underground & Nico, it does boast the best song ever about the German vocalist who appeared on the Velvets’ landmark LP. More on that later.

Kevin Ayers’ last LP for the prog-oriented Harvest label, Bananamour isn’t as far out and cerebral as 1970’s Shooting At The Moon or as wonderfully weird as 1969’s Joy Of A Toy, but it has more hits than misses and it contains perhaps the founding Soft Machine member’s greatest composition. More on that later.

Bananamour—a fruity, bilingual portmanteau word that suggests Ayers is not to be taken totally seriously—starts with the woozily beautiful and ominous “Don’t Let It Get You Down (For Rachel),” a ballad redolent of the Beatles’ “Dear Prudence” and “Carry That Weight.” Ayers’ feeds his voice through a Leslie speaker while backing vocalists Liza Strike and Doris Troy vibrantly burst to the fore with the title chorus. The carefree lope of “Shouting In A Bucket Blues” is elevated by guest musician Steve Hillage’s honeyed, psych-blues-inflected electric guitar, which contrasts with Ayers’ lusciously lugubrious acoustic-guitar strum. Bassist Archie Legget steps to the mic to sing “When Your Parents Go To Sleep,” a brassy, wobbly legged blues-rock ballad about aching hormones. His voice is like a less pugnacious Joe Cocker while the tune resembles the Stones’ “I Got The Blues.” I’m not complaining.

Another impressive guest, Soft Machine organist Mike Ratledge, illuminates “Interview.” With Legget’s bass line getting to the funky nitty-gritty, this is severe blues rock that cuts as deeply as Fleetwood Mac’s “Oh Well.” Thankfully, this tune gets stranger as it goes, with Ratledge going off into the stratosphere with some mindblowing improv. Another Soft Machine alumnus, the inimitable Robert Wyatt, bestows harmony vocals to the warm, intimate ballad “Hymn.”

Bananamour has a couple of goofy tangents, too. “Oh! Wot A Dream” falls somewhere between Pink Floyd’s “Pow R. Toc H.” and a Bonzo Dog Doodah Band ditty while “Caribbean Moon” comes off as a British take on Nilsson’s “Coconut,” with all the insouciant charm and faux-calypso vibe that that implies. (“Caribbean Moon” appears on the US Sire edition, not the original Harvest release.)

Now for the pièce de résistance (thank you for your patience)—“Decadence,” a chiming, slow-blooming drone-rock epic that portrays the aforementioned Nico as a cold, elusive heartbreaker. A key passage: “Fading flowers in her hair/She’s suffering from wear and tear/She lies in waterfalls of dreams/And never questions what it means/And all along the desert shore/She wanders further evermore/The only thing that’s left to try…/She says to live I have to die.” Harsh, dude. The song’s gradually accelerating and ascending cruise to the stars (Legget’s bass is a spiraling, springy wonder) foreshadows soulful British space-rockers Spiritualized. That is high praise, indeed. You can bet legendary BBC Radio DJ John Peel loved Bananamour. -Buckley Mayfield