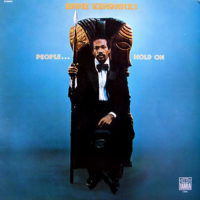 After a hit-strewn 11 years with the Temptations, for whom he sang lead and arranged vocals on many songs, singer Eddie Kendricks embarked on a solo career in 1971 with All By Myself. But it was his sophomore solo set, People… Hold On, where the golden-falsetto’d soul man seriously realized his potential and stretched the parameters of what a Motown artist could accomplish on record, sashaying through the door to artistic freedom that Marvin Gaye and Stevie Wonder had opened.

People… Hold On enjoyed only modest commercial success (#131 in the US album chart, three singles that entered the top 100: “Eddie’s Love,” “If You Let Me,” “Girl You Need A Change Of Mind”), but it’s Kendricks’ strongest solo LP. (The silky-toned singer sadly died from lung cancer in 1992 at age 52.)

Album-opener “If You Let Me” saunters in nonchalantly, a seductive funk-soul charmer to the core. Its first words—“Baby, I know I blew your mind”—prefigure what the artist is going to do to the listener. True enough, the next track, “Let Me Run Into Your Lonely Heart” proves itself to be one of the greatest funk jams on Motown. In the Funkadelic/Sly & The Family Stone realm of filthy and heady groove science, this cut should be way better known. Another side 1 highlight is “Girl You Need A Change Of Mind,” a fixture throughout the ’70s at NYC DJ David Mancuso’s legendary Loft parties. It’s simply one of the silkiest, sleekest proto-disco songs to which your ever-lovin’ ears and ever-swivelin’ hips will get down. In a similar vein, “Date With The Rain” breezes in with a swift, danceable rhythm over which Kendricks sings ecstatically about walking and crying in the rain, his heart breaking despite the incredible groove soundtracking his dejection. Lovers of that paradoxical music/lyrics split à la Smokey Robinson will be in heaven.

Now, about 40 percent of People… consists of fairly trad, bubbly Motown soul balladry, and they’re fine, if sometimes saccharine, songs, but they don’t prepare us for the album’s pinnacle, “My People… Hold On.” This towering anomaly in the Motown catalog has been sampled at least 25 times, including by J Dilla on 2006’s Donuts and by Erykah Badu on 2008’s New Amerykah: Part One (4th World War). Understandable. The conga beats and bass line are deep and sensual, the chicken-scratch guitar very subliminal, and the backing vocals and Kendricks’ lead are poised yet impassioned, calling for unity and strength among black folks fighting systemic oppression. (It’s hard to imagine D’Angelo not taking comprehensive notes to it.) It’s phenomenal how Kendricks and company imbue so much gravity into this song, considering how few elements are deployed. An innovative benchmark in ’70s funk, “My People… Hold On” should play at every Black Lives Matter function.

Despite being created by such a popular musician on a revered label (which reissued it on wax in 2018), People… Hold On is still under-acknowledged. That’s a mystery… and a damn shame. -Buckley Mayfield