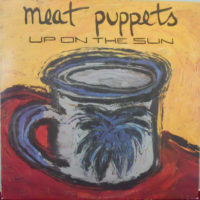 Kurt Cobain’s favorite Meat Puppets album was II. Obviously. And it’s not hard to understand why Nirvana covered three songs off of it (“Plateau,” “Lake Of Fire,” and “Oh, Me”). Its combo of poignant, desert-fried mysticism and virtuoso, Tasmanian Devil punk packed a distinctive punch—especially for 1984. As great as II is, though, I like Meat Puppets’ follow-up even more.

When Up On The Sun tumbled off the SST Records conveyor belt of awesomeness in 1985, it hit fans like a solar flare. Curt Kirkwood (guitar), Cris Kirkwood (bass), and Derrick Bostrom (drums) had taken another great leap forward, leaving behind their punk roots for a bizarre agglomeration of psychedelia, country/bluegrass, and prog rock. I’m happy to report that Up On The Sun still blazes as hot as it did over 35 years ago. Either that or I’m stuck in my 23-year-old mindset. Anyway…

The opening title track finds Curt in mellow stoner sage vocal mode (think Jerry Garcia crossed with Steve Miller) as the group slouch into a Grateful Dead-like, implied-funk amble. Then the buoyant chorus shocks you into a body-wide alertness, as if you’ve actually found yourself on the titular star. Helluva way to begin your best album. The intro to “Maiden’s Milk” barges in with a Zappa-esque motif of absurdly frilly prog-jazzitude, then the song shifts to a swift, Leo Kottke-esque bluegrass romp, with bonus chipper whistles. Here, we become aware that Curt switches into different styles and tones with an unparalleled, speedy nonchalance that would make Frank’s mustache curl with envy.

The album’s greatest achievement, “Away” recalls both the Police’s “When The World Is Running Down, You Make The Best Of What’s Still Around” and the Feelies’ “Away” (what are the odds?). There’s a faint undercurrent of swerving, Möbius-strip insistence in Curt’s guitar riff that speaks of Afrobeat knowledge, and the track feels as if it’s going to fly right out of the grooves into that fiery orb in the sky. The mercurial country funk of “Animal Kingdom” is awash with wonder about said domain, and the bridge features Cris’ bass mimicking noises of imaginary creatures. Nice!

Another highlight is “Swimming Ground,” which combines head-spinning country-rock euphoria and touching nostalgia for a childhood idyll. It’s as if the Puppets spiked the concept of “Americana” with the strongest amphetamines and LSD—both of which it wouldn’t be far-fetched to imagine the band consuming in those heady days. “Buckethead” is not a tribute to the Guns N’ Roses guitarist, as he didn’t hit public consciousness till the early ’90s, but the fleet, fluttering filigrees Curt peels off here would surely make him doff his KFC container in respect. The song sounds as if Fear Of Music-era Talking Heads had lost their uptightness and put pedal to the metal. It gives quirkiness a good name.

Up On The Sun‘s remaining five songs offer nonstop excitement. “Enchanted Porkfist” is a clunky pun, but this fast and furious instrumental zooms and curlicues like an American Southwestern Gentle Giant. It’s a new breed of prog rock in which unpredictable tempo changes and virtuosity sound as natural as getting a sunburn in Arizona, Meat Puppets’ home base. Throughout, Curt flaunts superhuman reflexes yet an unbelievably gentle touch that enables him to generate riffs that zip by at an astonishing clip while also sounding velvety, twinkly, and pliable—it really is miraculous, like the Dead’s “Dark Star” at 78rpm. “Creator” abounds with Curt’s faux-wise gobbledygook about deities—which is just as valid as any “good book”’s gobbledygook, and it boasts the advantage of rocking way harder than the Bible or Koran.

Every Meat Puppets release after Up On The Sun receded farther away from its unprecedented incandescence, and that’s okay. Cobain and company knew that trying cover anything on it would be a fool’s errand, because the songs here are too dauntingly sui generis. You have to know your limitations. -Buckley Mayfield