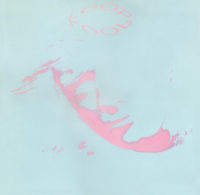 Loop’s heyday was brief (1987-1990), but it burned intensely. Over three studio albums, 11 singles and EPs, and a few compilations, the British group—who were named after an obscure Velvet Underground track—combined the best qualities of indomitable rock icons the Stooges and Hawkwind. (Many listeners and critics in the ’80s accused Loop of ripping off Spacemen 3, but the latter were such blatant emulators of older rock legends that the claim strikes me as absurd. Both Loop and Spacemen 3 siphoned inspiration from similar unimpeachable sources and possessed similar sonic aesthetics, so no wonder their music bore close resemblances. It was not at all hard for me to embrace both artists with conflict-free gusto.)

Why am I reviewing The World In Your Eyes—a comp of early singles that later grew to an odds-and-ends triple CD release in 2009—instead of a studio album proper? Because it most impressively represents Loop’s strengths and range and it contains my favorite track by them: “Burning World.” They are the rare band whose every release is worth copping, though, so if you see anything bearing that wavy Loop logo, grab it.

The aforementioned “Burning World” slows everything the fuck down to an opiated plod and piles stacks and stacks of delayed and phased guitars over tambourine-enhanced beats that clomp out a laggard tempo. Mackay’s bass line is sly seduction itself, bobbing elegantly eastward. The band leverage a lysergic, languorous whorl that rhymes perfectly with Opal’s “Soul Giver.” Nine minutes is just a tease for the gilded eternity that this blissfully apocalyptic song betokens. Hard to follow that, but Loop made their cover of Suicide’s “Rocket USA” even more ominous than the original through the armada-of-wasps buzz that the guitars and bass generate. Hampson & co. were utterly in synch with Alan Vega and Martin Rev’s unstoppable monomania, so it was no surprise they took a stab at this song. (Side note: Loop had fantastic taste in covers: Can’s “Mother Sky,” Pop Group’s “Thief Of Fire,” Neil Young’s “Cinnamon Girl,” Nick Drake’s “Pink Moon,” Godflesh’s “Like Rats”; you can hear ’em all on that triple-disc comp mentioned earlier.)

With “Spinning (Parts 1 & 2),” Loop really hit their primal-rocking stride. One guitar drones and one emits solar flare solos over the memorably buoyant bass line and brute, Klaus Dinger-esque Apache beat. Now they wanna be Iggy’s dogs. “Deep Hit” is the most Spacemen 3-like song here, a sexy, sloping head-nodder that induces total understanding of the raptures of heroin without ever having to inject it. I could wander pleasurably through all of eternity amid these shivering, fuzzed-out guitars that are funhouse-mirrored to heaven and back. “I’ll Take You There” is not the Staple Singers song, but rather a pinwheeling orb of caustic guitar radiation that hovers with malevolent intent. The insistent maracas action seems to be lifted from Steve Reich’s Four Organs, which I appreciate.

“Brittle Head Girl” is essentially a tribute to Faust’s “Jennifer,” its see-sawing bass line and woozy guitar shimmy complementing Hampson’s earnest paean to a… brittle head girl. It was the closest Loop ever came to writing a pop song (even if “Black Sun” was their “Black Hole Sun”), but dense, regressive radio programmers weren’t ready for such hushed sublimity.

As their name implies, Loop were all about the trance-inducing power of repetition. They blew out the minimalist exoskeletons of their songs to firmament-filling dimensions, troweling on the guitar effects, generating the most brutal yet mind-expanding textures, and Moebius-stripping themselves—and you—into deep, asteroidal space. -Buckley Mayfield