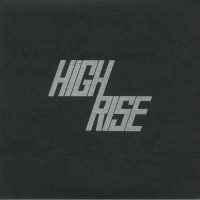 Japan has produced a fair number of musical units who go to sonic extremes that you rarely hear in the West. To name just a handful, Merzbow, Massona, Boredoms, Fumiya Tanaka, and even Teengenerate boast catalogs that often make their Anglo-American counterparts seem a tad restrained. High Rise, too, occupy a lofty place in the pantheon of tinnitus-inducing terrorizers from the Land Of The Rising Sun. Their sophomore full-length, II, pushes rock to a precipice of oblivion where few have gone, straining song form to near-bursting point and going so far into the red that they push the needle into oxblood on the VU meter. It’s a helluva thing.

The 53-second opener “Cycle Goddess” offers a revved-up, raucous appetizer to tip you off to the ramalama banquet ahead. The next song, “Turn You Cry,” could almost be an early Ramones or Clash tune; this is what passes for a radio song in High Rise land. Bassist Asahito Nanjo’s vulnerable, slightly reverbed vocal gets buried beneath a squealing, pummeling rock avalanche that sounds like guitarist Munehiro Narita has two more axmeisters supplementing his barbed-wire wall of rococo squealing and metallic sheets of clangor. Dr. Euro’s wrecking ball drums miraculously punch their way through the ultra-thick guitar/bass lava flow. Hard to believe only three humans are creating this monstrous sound.

The dense, adrenalized rock of “Cotton Top” roils in the tradition of MC5’s “Black To Comm,” Spacemen 3’s “Revolution,” the Stooges’ “L.A. Blues,” and Blue Cheer’s “Parchment Farm.” Rolling and tumbling relentlessly toward a termination station, “Cotton Top” is noisy hard rock distilled to a lethal essence. You know the drill, but you’ve never felt it this hard and this intensely. “Last Rites” ups the ante yet again, its bulging, aggressive rock making you feel as if you’re on top of the world, even as High Rise are intent on blowing it up. Narita proves himself a guitar guerrilla, spraying bullets and throwing flames in every direction at once, mowing down apathy and inertia with killer instincts. He crams in more ideas per minute than most guitarists do over a full LP.

Even though it’s over 13 minutes long, “Pop Sicle” is the album’s single, a quasi-’60s-style beat song that’s as hooky as anything on Jesus And Mary Chain’s Psychocandy and almost as blurred and riddled with feedback and fuzz. High Rise knew they’d hit on a seductive riff here, and they wring every last drop of psychedelic-groove juice out of it. “Pop Sicle” accelerates in the second half until your eyes are pinwheeling in their sockets and your ear drums are pulsating at 180 bpms. The song’s a psychedelic speed freak apotheosis and makes nearly everything else in the rock canon seem earthbound and moribund.

In 2018, Black Editions did a beautiful remixed and remastered vinyl reissue of II. Even that may be hard to score now, but you should put in the effort. Streaming is not the proper way to absorb High Rise’s shock tactics. -Buckley Mayfield