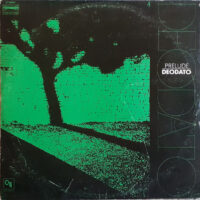 Brazilian keyboardist/composer/arranger Eumir Deodato’s records are bargain-bin staples, but some of them are cheap heat. Case in point: Prelude. First, it boasts the hugely unlikely hit “Also Sprach Zarathustra (2001),” a jazz-funk reinvention of Richard Strauss’ momentous classical piece that illuminated Stanley Kubrick’s 2001: A Space Odyssey four years earlier. Second, it contains the oft-sampled “September 13,” a tune that Deodato wrote with the powerful, dexterous fusion drummer Billy Cobham (Mahavishnu Orchestra, Miles Davis, George Duke, et al.). Third, the cover has that lovely glossy sheen that Creed Taylor used on all of his CTI label releases. Because records should feel good, too.

My first encounter with album-opener “Also Sprach Zarathustra (2001)” dates back to the mid ’90s. As I was browsing in a massive, CD-dominated Cleveland record store, one of the clerks decided to play Prelude. “Zarathustra” soon swept me to deep Kubrickian space, with Deodato and company renovating the stars to glitter with an ungodly radiance. After an intro of tambourines, burbling organ, and paradiddles, the piece soon shifts into a higher gear with a funky Cobham beat that wonderfully lags behind Deodato’s fanciful electric-piano acrobatics and Stan Clarke’s cat-like bass strut. Then in a move that upstages everybody, John Tropea inscribes baroque calligraphy on the firmament with a mercurial, diamond-hard guitar solo. These nine minutes of virtuosity and inventiveness take that Strauss opus to zones heretofore unknown. Talk about an album blowing its wad right out of the gate…

The rest of side one can’t help seeming slight. The Deodato composition “Spirit Of Summer” offers a stark contrast, as Eumir and the boys downshift into a pensive ballad that swells, swirls, and glimmers like a WWII-era Hollywood soundtrack—or perhaps a Quincy Jones-like approximation of same. A rococo guitar solo by Jay Berliner (Van Morrison’s axe man on Astral Weeks) lends the piece a flamenco air while the flute and orchestrations tilt the coda into airy-confection territory. “Carly & Carole” verges on frou-frou, if competent, dinner jazz, wafting pleasantly on mellow plumes of flute.

On side two, things initially remain a tad lightweight with “Baubles, Bangles And Beads,” which comes off as a sprightly, Herb Alpert-esque jazz-pop trifle. But after a bit, Tropea’s hip, snaky electric-guitar solo signals to the other players to elevate their game accordingly, with bassist Ron Carter, Cobham, and conga masters Airto and Ray Barretto especially standing out. Thankfully, the final two cuts restore our faith in Deodato. “Prelude To The Afternoon Of A Faun” levitates on Hubert Laws’ unspeakably beautiful flute solo, icy piano cascades, funky conga and flute action, and Marvin Stamm’s bold trumpet solo. This song really blossoms and then ebbs into cerebral, Bitches Brew-like introspection. Claude Debussy-penned music likely has never grooved so hard. Prelude closes on Deodato and Cobham’s très funky “September 13.” That much-sampled intro features Cobham so deep in the pocket, he punches through it. Tropea’s laconic chicka-wokka guitar accents and filthy flare-ups split the difference between Carlos Santana and Harvey Mandel while probing bass, fruity electric piano, and triumphant flutes brighten the corners. Eumir sure did bookend this album with burners.

As I type, there are many copies of Prelude classing up used-vinyl bins nationwide, and they’re priced to move. No sophisticated home should be without one. -Buckley Mayfield