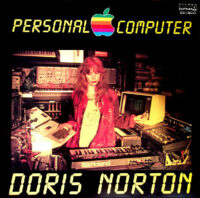 Whether it’s down to sexism or her Italian nationality (or perhaps both), composer/musician Doris Norton has gone largely overlooked as a major figure in the computer-based electronic-music world. (Before her solo career, Norton played in the gothic prog-rock group Jacula.) Thankfully, in 2018, Mannequin Records reissued three of Norton’s ’80s albums: 1983’s Norton Computer For Peace, 1984’s Personal Computer, and 1985’s Artificial Intelligence. I bought them all and instantly wondered how they’d escaped my radar, as I’m an avid fan of avant-garde European electronic music. But somehow I’d read nary a word nor heard a note of Norton’s music till three years ago. I’ve been making up for lost time ever since.

My favorite of that trilogy is Personal Computer, her fifth LP overall. During the ’80s, Norton was sponsored by Apple Computer, and made a music program for IBM USA, so the title is no mere superficial signifier. Personal Computer is a wonderful entry point for the Norton novice, although if you’re expecting it to hit with the paradigm-shifting impact of Kraftwerk’s similarly titled 1981 classic Computer World, you’ll be disappointed. Nevertheless, Personal Computer is tonally and melodically sophisticated, with rhythms that can get a floor humming. Created with assistance from Antonius Rex, the record’s a rare blend of heady academia and dance-floor decadence, with a dash of neon-sprayed synth-pop ebullience.

The title track rollicks out of the gate like a dance anthem for video-game geeks, a serious kick-drum pummel propelling everything toward a starry grid in the matrix. The warped, femme-android vocals add a layer of otherness to the storming Yellow Magic Orchestral Maneuvers In The Dark hullabaloo happening. “Norton Apple Software” flaunts a sproingy, robotic rhythm that punctuates a swarming and sputtering synth attack, foreshadowing the stardusted turbulence of Detroit electro unit Drexciya. The bombastic synth symphony “Binary Love” creates a huge impression with punishing 4/4 beats, scything hi-hats, and fake wind howls. Forget the noble aim of soundtracking video games; Norton sounds like she’s shooting for Hollywood sci-fi blockbusters. Similarly reaching for the stars is “Parallel Interface,” with its madly hectic riffs spiraling skyward in contrast with elasticated 303 bass palpitations and brutal, methodical beats.

It may not be the most extravagant cut here, but “Caution Radiation Norton” is my favorite on the album. Its beats and hysterically bleepy synths ripple in an odd meter, while sampled male chants serve as both drones and punctuation, showcasing Norton at her most idiosyncratic. “A.D.A. Converter” is an ominous squelcher that marches to battle with a grim, majestic finality, closing the album with an aptly somber mood for the Mutually Assured Destruction vibes that haunted the year 1984. You might say that Norton captured the spirit of George Orwell’s dystopian novel in a novel way, too. -Buckley Mayfield