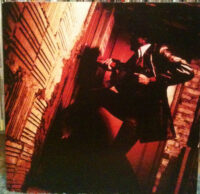 In a review on this blog of Pussy Galore’s Sugarshit Sharp, I wrote that if you can only own one record by these NYC scuzz-rock scoundrels, make it that one. But I placed an asterisk at the end of that statement and noted that Dial ‘M’ For Motherfucker is also worthy of your time/money. So here I am six years later recommending that you clear some headspace and shelf space for Pussy Galore’s penultimate long-player.

If nothing else, Motherfucker is remarkably consistent. It’s a full-throttle avant-garage-rock record that gives zero fucks about audio fidelity or your impending tinnitus. The tension between trad roots rock and fuck-your-landlord noise causes sparks all over the place. Although PG vocalist/guitarist Jon Spencer and bassist Julia Cafritz attended the Ivy League school Brown University, their music comes off as stoopid and brutish… albeit in the best way. They were rich kids playing as if they were dirt-poor and desperate to outrage listeners; they strove to be perceived as outsiders of polite society. Song titles such as “Dick Johnson,” “Eat Me,” and “Solo=Sex” telegraphed the provocative sleaziness Pussy Galore flaunted. It was shtick, but they actually convinced you that they were white-trash idiot savants, with a surplus of energy and an epicurean taste for distortion.

Motherfucker‘s opening track “Understand Me” starts with a bleeped-out tirade by Spencer, then the song arises out of this baffling turmoil, with Bob Bert’s scrapyard drums kickstarting a filthy primitivo stomp, Spencer and Neil Hagerty’s guitars coloring outside the lines of rock decorum and bleeding heavily into the red, as the whole rumbustious apparatus causes fight-or-fuck juice to spurt through your lymphatic system. This sets the tone for the rest of Motherfucker, as evidenced by the next song. A runaway junker spewing soot and loose radiator clanging in the chassis, “SM 57” is the best song ever titled after a microphone.

The theme continues with “Undertaker,” which abounds with unexpected tempo changes and radical dynamics and timbres, qualities that lifted PG above their scum-rock peers. “Dick Johnson” begins with a blues-rock guitar intro that would impress the iconoclasts in Hampton Grease Band, then accelerates into a junkyard boogie that could score your next outdoor orgy. The merciless, hard-punching rock of “Evil Eye” makes most everything else in the genre sound too decorous and bloated by half. The first three-fifths of “Kicked Out” predates the grotesque, disjointed approach of 21st-century experimentalists Black Dice, then shifts into an MC5 barrage of lighting-fast jammage.

The freewheeling riot rock of “1 Hour Later” sounds like if all the hyperbolic mythology about Elvis Presley and the Rolling Stones were actually manifested in Americans who came of age in the ’80s and were savvy with rebellious rock signifiers. The album’s main anomaly, “DWDA,” is an XXX-rated shuffle with a bulbous bass blurge that’s like a fucked-up, serrated foghorn. The song sounds like it’s repeatedly being sucked into a vortex. Hinting at Hagerty’s future Royal Trux magnum opus, Twin Infinitives, it’s some vicious rock deconstruction.

Pussy Galore proved that rock can sound revitalized with its basic tools and minimal studio trickery, as long as the players possess a boldness and inventiveness—qualities not exactly in abundance in the genre over the last 35 years. -Buckley Mayfield

Located in Seattle’s Fremont neighborhood, Jive Time is always looking to buy your unwanted records (provided they are in good condition) or offer credit for trade. We also buy record collections.