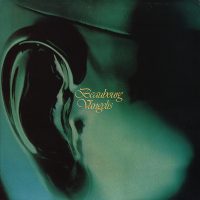 I’m generally a fan of LPs that feature two sidelong tracks—mainly for the sheer audacity and large-scale ambition it demonstrates. If you’re gonna take up a whole side of wax, you’d damn well better come with the fire, right? And that’s what Vangelis (born Evángelos Odysséas Papathanassio in Volos, Greece, 74 years ago) does on Beaubourg, a record that must’ve made the execs at RCA sweat bullets as they tried to figure out how to market this dark beast. Viewed from a certain angle, it could be the Greek composer’s Metal Machine Music (also an RCA release)—but without the hilariously snarky liner notes.

Beaubourg followed some of Vangelis’ most accessible and popular releases in his discography, including Heaven And Hell, Albedo 0.39, and Spiral. So when Beaubourg dropped in 1978, at a time when 69 percent of musicians in the industry were making their disco moves, it must’ve baffled fans. Reportedly inspired by Centre Georges Pompidou’s architecture in Paris, Beaubourg is more Xenakis than Moroder.

The nearly 18-minute “Part I” immediately thrusts you into a state of disorientation and panic, as Vangelis works his synthesizer sorcery toward its most chthonic ends. The opening stretches sounds like Morton Subotnick possessed by demonic forces, as warped, spasmodic bleeps streak across the stereo field like malevolent comets. It sounds as if Vangelis improvised this panoply of bizarre, chaotic, and sometimes eerily beautiful passages while in the throes of an epic DMT bender. As he had nobody in the studio but himself, Vangelis probably said, “Fuck it, I have Chariots Of Fire and Blade Runner soundtracks ahead of me, so I might as well bust out all of my weirdest moves before I rake in my millions.” Or maybe he just wanted to make RCA’s executives, marketing directors, and publicists sweat bullets. Whatever the case, this piece messes with your mind more effectively than even Tangerine Dream and Klaus Schulze’s mind-altering marathons.

The 21-minute “Part II” traverses some of the same territory as its predecessor, but in a more subdued manner, yet it’s still pretty unnerving in an Andromeda Strain soundtrack way. (Highest praise, by the way; respect to Gil Mellé.) Like Beaubourg‘s A-side, the B-side changes every 10 or 15 seconds, moving from fascinating episode to intriguing development with a rapidity that suggests a genius working at the zenith of his prodigious creative powers.

This may be a minority opinion, but I’ll take Beaubourg over Chariots Of Fire or Blade Runner any day. It’s a bonus that it likely made major-label bigwigs sweat bullets. -Buckley Mayfield