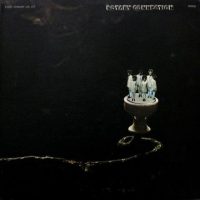 Sprawling multiracial/multi-gendered Chicago-based ensemble Rotary Connection were the Sly & The Family Stone of the Midwest. Over the course of six albums from 1967 to 1971, Rotary Connection achieved a zenith-y fusion of loose, hippie-rock dynamics and orchestral-soul flamboyance—as well as a knack for bizarre, enchanting reconfigurations of other artists’ songs. Arranged by the studio genius Charles Stepney, this music should’ve been topping charts and entering critical canons and selling out arenas. But, alas, heads weren’t quite ready. And while some 21st-century sticks in the mud might grumble about Rotary Connection sounding “dated,” I would counter that observation with “What a time stamp for a band to carry for eternity!”

Rotary Connection’s second album, Aladdin more effectively flaunts the group’s songwriting chops than does their cover-heavy 1967 debut full-length—which, I hasten to add, is fantastic in its own way, too. “Life Could” sets the tone with a flourish; it’s like if Blood, Sweat & Tears had more finesse, more soul, and better vocalists. Rotary Connection’s not-so-secret weapon, Minnie Riperton, establishes her dominance right away, her solar-powered range and emotional depth propelling the song to heights most rock groups cannot dream of reaching. “Life Could” is a paragon of horn-rock bombast and grandstanding psychedelic soul. Holy shit, what an opening salvo… And it’s followed by the aptly soaring “Teach Me How To Fly,” a tune nearly hysterical with hope and inspirational brio. Two tracks in, and the listener may already be overwhelmed.

“Let Them Talk” downshifts the tempo a bit, as its intro of Lothar And The Hand People-like quirkiness blossoms into a rambling slice of Free Design-esque sunshine pop, before it deviates into a withering critique of squares who can’t handle “hippies, yippies, and freaks.” This song may make you think of the West Coast Pop Art Experimental Band at their most cynical. Written by Japanese psych-pop phenom Harumi Ando, “I Took A Ride (Caravan)” finds Stepney and company blowing out the original to a phenomenal psychedelic swirl of sitar, harp, strings, and horns, with Riperton shining at her most dulcet. The title cut is a mellow, Motown-like stormer with strings, flute, and cloud-busting chorus. It’s an absurd sunburst of optimism, especially when heard with a set of 2018 ears.

While “Magical World” broods with a lush 5th Dimension/Supremes glow, “I Must Be There” comes off like a more ornate and sophisticated take on what the Beatles were attempting on “The Inner Light” or what It’s A Beautiful Day tried to achieve on their symphonic-psych debut LP. “I Feel Sorry” puts similar efforts by late-’60s Moody Blues into the shade, bolstered by a serpentine guitar solo worthy of SRC’s Gary Quackenbush. But “Paper Castle”—an ostentatious anthem about the fragility of civilization—steals the show. It’s an ultimate album-closer, radiating an ecstasy that borders on the apocalyptic. The ambition here is off the scales, the bombast as baroque as heaven.

While every Rotary Connection album has much to offer—even the holiday-themed Peace—Aladdin is the work that best demonstrates their compositional brilliance and whip-smart dynamics. Fifty years after its release, this cult classic can still be found for relatively low prices in used bins… at least for now. -Buckley Mayfield