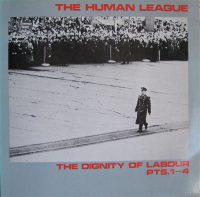 This may be an unpopular opinion, but I think the Human League peaked with this EP. At this early juncture in their career, the band consisted of primary composers Ian Craig Marsh and Phil Oakey and keyboardist Philip Adrian Wright. Oakey didn’t sing a note on these four tracks, and that’s fine with me. Without his stentorian, romantic emoting, the Human League had more room to flaunt their excellent ear for strange textures and alienating atmospheres—you know, the stuff that makes life worth living.

Divided into four parts, The Dignity Of Labour begins with a slice of dark, quasi-industrial electronic music that’s not quite in Throbbing Gristle’s diabolical domain, but it’s certainly more morbid than what would follow in the Human League’s catalog. Marsh and Oakey work up a slightly upbeat death-disco lather, but it doesn’t match the club-friendliness of other late-’70s League releases such as “Being Boiled” or “Empire State Human.”

Parts 2 and 3 enter some deep Teutonic territory. The former is the EP’s peak, its stark, foreboding maschine musik recalling the innovations of German geniuses such as Conrad Schnitzler and Seesselberg. The crystalline timbres the League summon on this track are just incredible. “Pt. 3” is a dizzying whirl of high-pitched, Theremin-like synth and vibrant arpeggios reminiscent of some of Harald Grosskopf’s and Tangerine Dream member Peter Baumann’s work. “Pt. 4” ends things on an eerie note of BBC Radiophonic Workshop-like atmospheres, a sound miles away from what the League would be doing on 1981’s Dare or even 1980’s Travelogue.

As with a lot of things reviewed in this space, The Dignity Of Labour could use a reissue, as it hasn’t seen a repress since the year of its initial release. Seems like a no-brainer for a label like Minimal Wave, Dark Entries, or Medical to re-release it—although there could be thorny legal hurdles. Anyway, I’m just putting that idea out there… -Buckley Mayfield