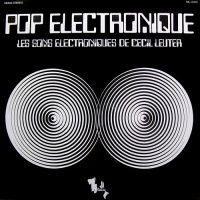 Pop Electronique represents some kind of zenith of effusive, beat-heavy, Moogsploitation-leaning library music. The mad handiwork of French musician Roger Roger (1911-1995; that apparently was his real name), this record is a playground for Moog fanatics and electronic-music and hip-hop producers looking for outrageous samples. The 14 tracks here, each titled “Pop Electronique,” all running in the 1:30-2:40 range, have no vocals to get in the way of your Akai MPC pilferings. Leuter’s concision and precision pay huge dividends. There’s not one dull second on Pop Electronique.

Whereas the LP’s first side abounds with hyper-kinetic party jams that are almost too fun, the flipside will make you flip in an entirely different manner. Pop Electronique gets stranger and more abstract as it goes, ending in a claustrophobic funhouse automaton nightmare of obsessive-compulsive zaps and spasms and repetitive conga hits. On track 10, the drums drop out and Leuter just lets loose with a wonderfully demented arpeggio splurge. On the 11th cut, he manifests a more abstract bleep and woob infestation similar to the hallucinatory work of Nik Raicevic, whose Head LP I reviewed on this blog last year. Cecil followed that one with a very discombobulated and stripped-down cha cha. It’s crazy to think the man was in his late 50s when he concocted these nutty tunes. I don’t know what Monsieur Leuter was on during the recording of Pop Electronique, but I want whatever it was.