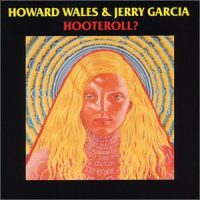 If you ask Siri, “What’s the funkiest album with Jerry Garcia on it?” you’ll probably get the wrong answer—if any. But if you ask me, that would be Hooteroll? Sorry, Merl Saunders.

Garcia and Howard Wales cut Hooteroll? during a brief spell when the Grateful Dead guitarist/vocalist was jamming with the brilliant keyboardist, who had previously played with A.B. Skhy and collaborated with German electronic musician and Irmin Schmidt cohort Bruno Spoerri. The result’s one of the more interesting and DJ-friendly GD spinoff projects.

“South Side Strut” bursts out of the gate with bravado, a brassy soul-jazz effusion with a surplus of greasy, chunky funk in its trunk. (Think the Doors’ “Peace Frog” or Deep Purple’s “Hush.”) This is my go-to track from this LP when I’m DJing. Its sports-highlight-reel brashness really grabs the attention.

“A Trip To What Next” opens with John Kahn’s snaky bass line and the triumphant orange-yellow bursts of sax and trumpet by Martin Fierro and Ken Balzall, but the mid section finds Wales and Garcia going off on a Floydian psychedelic excursion before the song returns to a peppy soul-jazz riff and a final Grateful Dead-meets-early-Chicago flame-out.

“Up From The Desert” is a beautiful sundown-shimmer of a song, a piece of meditative rock that hints at the grandeur of the Electric Prunes’ Release Of An Oath. Garcia is in prime form, sounding like Wrecking Crew badass Howard Roberts. Another great cut to drop into DJ sets, “DC-502” brings frenetic, funky soul jazz that flaunts Incredible Jimmy Smith/Richard “Groove” Holmes vibes.

Even if you don’t dig the music (you philistine), the cover by Abdul Mati Klarwein—who’s also done work for Santana, Miles Davis, Last Poets, and Jon Hassell—is worth the price of admission alone. -Buckley Mayfield