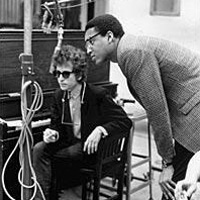 Ask your friendly neighborhood music nerd about the great producers of the ‘60s and you’ll hear some familiar names: Phil Spector. George Martin. Perhaps Barry Gordy. But Tom Wilson? Probably not. True, the output of this Zelig-like figure, though prolific, has very few distinguishing characteristics. There’s no “Wall of Sound”. No Abbey Road studio wizardry. No Funk Brothers. Yet despite this lack of an authorial stamp, Tom Wilson’s legacy is perhaps even more significant and far-reaching than those of any of his contemporaries.

Tom Wilson was an anomaly. Texas-born, Harvard-educated, and a card-carrying Republican, he also happened to be African-American. Such a distinction thankfully makes no difference in the music business today. But the fact is, back then, finding success as a black man in an industry whose management was dominated by white males was no small feat. Wilson began work in the mid-50s as a jazz producer. It now makes sense that he worked with some of the most groundbreaking artists of the period, among them Sun Ra and Cecil Taylor; exposure to such innovation and talent surely inspired and primed him for what lay ahead.

The next phase of his career began at Columbia Records in 1963. An up and coming folk singer named Bob Dylan was at loggerheads with his current producer, John Hammond, during the final days of the sessions for his second album, The Freewheelin’ Bob Dylan. Hammond quit, and Wilson finished the job. Wilson produced Dylan’s next three albums, including the definitive Bringing It All Back Home, the first folk record, many argue, to fully incorporate the conventions of rock and roll production. Oddly enough, Wilson once stated that he never really cared much for folk or rock. This is a colossal irony, considering that without him it’s doubtful that the two would merge the way they did over the coming years. While Wilson may not have invented folk-rock, he was certainly its most influential agent. Just ask Simon and Garfunkel, whose little-heard acoustic track “The Sound of Silence” Wilson overdubbed with drums and electric instruments, sending the 1965 single to Number 1 and thereby giving the duo incentive to carry on after they had all but broken up.

Other fascinating anecdotes pepper the Wilson narrative. One oft-repeated one concerns guitarist Al Kooper. Sitting in the control booth during the sessions for Highway 61 Revisited as Dylan and his backing band laid down tracks for “Like a Rolling Stone”, Kooper composed an organ part for the song in his head. When he asked Wilson if he could try it out, Wilson slyly smiled and responded, “You’re not an organ player”. Kooper took that as a yes, and joined in on the next take. Hardly knowing the song at all, Kooper placed his fills a half a beat behind Dylan’s singing. Frustrated afterwards with this sloppy performance, Kooper resigned himself to failure, that is, until Dylan told Wilson to turn up the organ part during the playback. The take was used on the album, and history was made.

If Wilson had left the business at that point he’d still easily hold a place as one of the greats, but he was just getting started. In 1965, Verve Records appointed him head of A&R, a wise move for a label seeking to branch out into the more avant garde regions of rock. One of the first acts he signed was an LA band who called themselves The Mothers of Invention. Thinking that he had signed a somewhat accessible white R&B combo, Wilson was confronted with a new reality when, during a late night recording session, a young Frank Zappa conducted a cacophonous choir consisting of long-haired, unwashed denizens of the Sunset Strip scene. Rather than freak out (pun intended), Wilson went with it.

At the heart of Wilson’s genius was the gift of recognizing the talent of different people and then bringing them together under the right circumstances. The performers whom he worked with couldn’t have been more diverse, but he always understood and respected their artistic visions; rather than tinker with them, he stayed out of the way. Moreover, knowing how to work the system ensured that these visions could be realized. He sweet-talked execs and label bosses, procuring then unheard of sums of money for extremely risky projects while somehow still shielding those in his stable from artistic compromise. There were low points and failures, for sure, but when the magic Wilson formula worked, it produced some of the most groundbreaking, adventurous, and enduring material in the history of popular (and unpopular) music. This selected discography showcases some well-known and not-so-well-known highlights of Tom Wilson’s career.

The Animals Animalization (1966) Aside from the Soft Machine (see below) Wilson produced very few British acts. Recorded as the original line-up was beginning to splinter, Wilson was still able to coax a brilliant performance out of Eric Burdon and his cohort. The raw bluesiness of their earlier work is still here, but with an added dimension of psychedelia, a style that Burdon would fully embrace in the next incarnation of the Animals and in his later solo work.

The Blues Project Projections (1966) Though counting Al Kooper as a member, The Blues Project’s ambitious amalgam of folk, blues, and jazz initially hindered their efforts to achieve a musical identity. It took a person like Wilson to recognize the band’s eclectic influences and diverse skills and make them all flow together, and he did just that on this underrated album. One of their most popular songs, “Flute Thing” (a hit during the early days of underground FM radio) is here, but unfortunately, their other one, “No Time like the Right Time” (which eventually appeared on the original Nuggets), is not. It should be noted, however, that the latter appeared as a single prior to Projections’ release. Not surprisingly, Wilson produced it as well.

Nico Chelsea Girl (1967) Wilson worked with members of the Velvet Underground (see below) before, but Chelsea Girl is quite different than anything else he did with them or anyone else. The level of backing talent on the record is astounding; Lou Reed, John Cale, and Jackson Browne all sat in on the sessions. Yet the musical accompaniment is sparse and anonymous, the perfect foil for Nico’s ghostly delivery of its dark subject matter (drugs, betrayal, death). Chelsea Girls marks one of the few times when Wilson artistically intervened, insisting that strings and flute be added to some of the songs. Nico despised and disowned the finished product. Still, many agree that it’s the best thing she ever recorded outside of her work on the Velvets’ debut LP.

The Velvet Underground White Light White Heat (1968) Debate rages over Wilson’s level of involvement with the first Velvet Underground record. Though Andy Warhol was given full credit for production duties (most likely for financial reasons,) Wilson is said to have produced at least four of its tracks and to have supervised the final mix-down of the whole thing. Whatever the case, he was brought back as full-on producer for this sophomore effort, the most challenging and uncompromising in the band’s catalog. Having worked with the Velvets before, Wilson probably knew it best to leave them to their own devices. Besides, he had other things going on anyway. Guitarist Sterling Morrison once recounted that Wilson, ever the lady’s man, spent most of the studio time entertaining a rotating roster of beautiful women. Say what you will about such a managerial strategy, but it’s doubtful that the raging sonic beast that is “Sister Ray” would have been unleashed upon an unsuspecting public had someone else taken the helm.

The Soft Machine The Soft Machine (1968) Recorded while on tour in the states (supporting Jimi Hendrix), The Soft Machine’s debut was one of the first high-profile rock albums to blatantly fuse jazz with psychedelia. From start to finish, this proto-prog opus is a frenetic whirlwind of Robert Wyatt’s evocative vocals and dexterous drumming, Kevin Ayers’ rubbery basswork, and the truly unique emanations of Mike Ratlidge’s distorted Holiday Deluxe organ. The songs transition seamlessly into one another, pausing only at the end of side one, a sequencing practice that would become common in the age of the Concept Album but almost unheard of at this time for any rock band. Wilson’s jazz background was surely an asset to the proceedings. But once again, his personal life seemed to play the true role in the album’s construction. Ayers recalled Wilson being on the phone with one of his girlfriends more often than him giving musical guidance to the band.

Harumi Harumi (1968) – Harumi was an enigmatic Japanese singer/songwriter, about which little is known today. While briefly based in New York in the late ‘60s, he cut this album. It’s received very little press over the years, and it remains an obscurity even to hardcore psych fans. Why a project like this—a completely unknown singer with a thick Japanese accent performing experimental music (on a double-album no less!)—was green-lighted by a major American record label will remain an even bigger mystery. But without a doubt, only someone like Tom Wilson could have made it happen. Parts of it, particularly the poppier material on the first disc, are brilliant, a lysergic fusion of rock, jazz, and eastern folk. The material on disc 2 can be tedious, particularly the god-awful twenty minute spoken-word piece, “Twice Told Tales of the Pomegranate Forest ”. Still, the album’s relentless risk-taking and experimentalism make it one of the most bizarre records of its era, and considering the producer who was involved here that’s really saying something!

Further Listening: Oddly enough, Tom Wilson did very little work with any ‘60s soul artists, a real shame considering the potential of such a collaboration. One possible exception would be his work with the Canadian blue-eyed soul act, Central Nervous System. Their one and only album, I Could Have Danced All Night, is an energetic collection of hard-hitting numbers with echoes of James Brown and Wilson Pickett. They might have found more success had they not broken up shortly before the album’s supporting tour.

The ‘70s saw a marked decrease in the output of Tom Wilson, and by the end of that decade he had completely left the music business. Unfortunately, he never had a chance to return. In 1978, he dropped dead of a heart attack at age 47. The loss of such a visionary was a tragedy in itself, but another added one was the fact that Wilson took his memories with him, documenting very little of his experiences and giving very few interviews. His life and achievements are the stuff of a great rock biography that has yet to be written. Until it is, only the music can tell his story, but oh what a story it tells! – Richard P

One comment on “Produced by Tom Wilson:A Guide to a Forgotten Visionary”