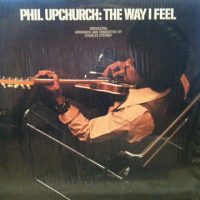 “ORCHESTRA ARRANGED AND CONDUCTED BY CHARLES STEPNEY” it reads under the title of The Way I Feel, and if that doesn’t sell you on this album, then I don’t know what to tell you. Because Stepney, as you should know, was a studio wizard who conjured certified magic for Rotary Connection, Minnie Riperton, Marlena Shaw, Ramsey Lewis, Muddy Waters, Howlin’ Wolf, and other talented musicians in Chicago during the ’60s and ’70s. But, of course, there’s more to The Way I Feel than Stepney’s exceptional ideas. Phil Upchurch—who also played with Rotary Connection and several other Stepney-associated artists—is a wonderfully expressive, virtuosic guitarist and bassist who issued a grip of very good LPs in the era mentioned above, including this one. (I don’t waste my time with mediocrity, dig?)

Much better is “Peter, Peter,” an Irwin Rosman composition that Upchurch turns into serpentine psychedelia while flaunting his mercurial jamming skills and facility for shifting between phenomenal fuzz and crystalline tones. Other highlights include “I Don’t Know,” a “Willie The Pimp”-style slab of nasty blues rock, and “Pretty Blue,” a laid-back, lascivious instrumental.

But with “Electrik Head,” Upchurch perversely saves the best for last. And, whoa, holy shit! It’s a career-peak song, an effusion of translucent guitar pyrotechnics, a cascade of icy, pointillist, tonal eloquence. I’ve played this psychedelic mind-blower in many a DJ set, and will continue to do so for as long as I can. Because I like to make a room full of people stop their chatter, put down their drinks, and gawk in amazement at the Hendrix-level sorcery going on here. Because it’s one of the greatest pieces of music the 20th century has yielded. Because I’m a sonic philanthropist who wants to take you to (Up)church. -Buckley Mayfield