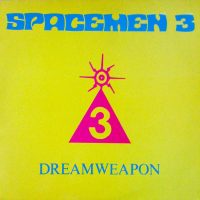 This anomaly in the sublime British space-rock group Spacemen 3’s catalog might be their headiest release, judging by how highly the true heads I know rank it. Inspired by minimalist composer La Monte Young, Dreamweapon is where Pete Kember, Jason Pierce, and company abandon rock and simply space the fuck out—at great length.

The two-part “An Evening Of Contemporary Sitar Music”—recorded live in London in 1988 by a full band—is a 44-minute study in patient, spangly guitar’d minimalism… with (spoiler alert) no sitar. Very little happens, but what does occur takes on a monumental importance. Over a foundation of murmuring oscillations (is it the sound of some god[dess] repeatedly guffawing? At least one acid trip suggested it was.), Pierce or Kember picks out a spidery, raga-like figure on electric guitar with laid-back insistence. As the piece progresses, the motif gains in intensity, and there’s a quote of “Just To See You Smile” from the Recurring LP. Does all this six-string foreplay build to a revelatory climax? No, it does not. However, you have to give “Dreamweapon” credit for this: It’s one helluva way to come down easy from a hallucinogen trip. I have first brain-cell experience with this scenario.

As for “Ecstasy In Slow Motion,” it’s doubtful there’s ever been more truth packed into one song title. This may be hard to believe, but there seems to be a harmonium drone humming underneath a shivering guitar that’s wailing a prayer to the electricity gods and then swirling skyward into a celestial orb of blinding light. This music is the elixir of eternal sonic truth, your most powerful, extended orgasm transferred into sine waves. Whenever I listen to this track, I always feel as if I’m dissolving into some sort of divine essential oil. It really is the best shit ever. “Spacemen Jam,” by contrast, is a desolate, bare-bones blues meditation that comes as something of an anticlimax after unprecedented heights of “Ecstasy In Slow Motion”—but what wouldn’t?

Dreamweapon has had many iterations, most of them on CD. Earlier this year, though, the great Superior Viaduct label reissued Dreamweapon on 2xLP with the two bonus tracks originally found on Space Age Recordings’ 2004 CD re-release and liner notes by Spacemen 3/Spiritualized bassist Will Carruthers. I highly recommend you get the Superior Viaduct version. -Buckley Mayfield