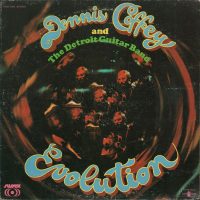 Even if you’ve never heard Evolution in its entirety, you’ve likely heard bits and pieces of Dennis Coffey And The Detroit Guitar Band’s debut LP sampled in dozens of hip-hop tracks. Head over to whosampled.com and gawp at the profusion of producers who’ve used Coffey and company’s extravagant funk and lysergic guitar tones to punch up their own cuts. (“Scorpio” alone has been sampled or covered 104 times.)

So, yeah, Evolution can safely be considered a foundational building block of hip-hop. The album’s essentially divided into freaky psychedelic funk heaters and simmering mellow joints that still possess traces of funk in their trunks. In the latter style you’ve got “Summer Time Girl,” “Sad Angel,” “Wind Song,” “Garden Of The Moon” (the last sampled by P.M. Dawn for their track “Even After I Die” from their stellar 1991 debut LP). These songs spotlight Coffey’s nuanced melodic chops and unerring ability to write carefree tunes. It helps that he enlisted fellow Motown session badasses like Bob Babbitt (bass) and Jack Ashford (percussion), as well as Rare Earth’s Ray Monette (tenor guitar) and Joe Podorsek (baritone guitar).

As lovely as those pieces are, though, you go to Evolution for the pure, uncut funk. Album-opener “Getting It On” busts out the gate with guitar pyrotechnics that portend extraordinary action over a taut funk rhythm; Coffey gets off a wild wah-wah solo near the end foreshadowing many other moments here. Sampled by Public Enemy, Beastie Boys, and nine others, “Getting It On” is a potent way to start an album.

“Impressions Of” is the epitome of blaxploitation-flick funk. Bolstered by chikka-wakka guitar and laced with interludes of crystalline languidness, it makes you want to sprint 100 yards in 9 seconds flat. “Big City Funk” is exactly what it says on the tin. Thankfully, that big city is Detroit, and its innate funkiness is world-class and filthy as hell. Then there’s the radical makeover of “Whole Lot Of Love” [sic], which funks the fuck out of the Led Zeppelin metal-blues classic. Genius.

The record’s climax (and Coffey’s career peak), obviously, is “Scorpio,” one of the unlikeliest American hits ever, though eminently deserving that status. Very few instrumentals make the top 10 in the US, and the fact that there’s an extended drum/conga solo in the middle of the song further distinguishes “Scorpio” as an anomaly. Babbitt’s bass solo also is a master class in maximizing funkiness with minimal gestures. It’s no surprise why this track’s become a fixture in breakdancing circles.

As a lad growing up the Detroit area, I’d hear “Scorpio” on the radio and become transfixed by its galvanizing dynamics and percussive audacity. How could this be happening on a medium as humble as radio? It’s still a mystery—plus, Sussex was an indie label. (For additional appreciation of “Scorpio”’s greatness, go YouTube its airing on Soul Train. You won’t be sorry.)

In case you haven’t gathered by now, Evolution is a funk classic with sizzling psychedelic flourishes, and it still turns up occasionally in the wild at reasonable prices. Grip it with gusto. -Buckley Mayfield