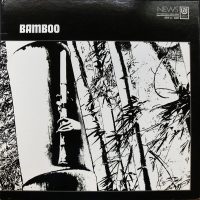 Recent years have seen several labels—Light In The Attic, Palto Flats, Jazzman, We Release Whatever The Fuck We Want, et al.—reissuing obscure gems from Japan. England’s great Mr Bongo imprint also has gotten into the act, most recently with jazz shakuhachi player Minoru Muraoka’s Bamboo coming out this summer. That’s a relief, as original copies of this idiosyncratic 1970 crate-digger’s classic go for hundreds of dollars.

Six of Bamboo‘s nine tracks are covers, and the quality varies among them. Jazz musicians covering Beatles songs was practically law in the ’60s and ’70s, but few artists have attempted to interpret the sentimental 1964 ballad “And I Love Her.” Minoru exoticizes the somewhat sappy melody and takes this middling cut from A Hard Day’s Night to a higher level. Similarly, Minoru does interesting things with the oft-covered folk ballad “The House Of The Rising Sun.” His is probably my favorite rendition—partially because there are no overbearing vocals, just four or five instruments burnishing a poignant melody that, it turns out, is ideal for the shakuhachi’s timbre.

Minoru also excels at archetypal lightweight mid-’60s pop such as Bacharach/David’s “Do You Know The Way To San Jose” and Tony Hatch’s “Call Me,” an EZ-listening standard made famous by Chris Montez and Petula Clark. Minoru transforms these overfamiliar melodies into something more touching through his serene blowing. The latter is the epitome of suave coolness in Minoru’s hands and mouth. These covers display Minoru’s instinct for tackling songs that have been frequently interpreted and injecting them with elements of distinctiveness. You can also hear this when he bathes Simon & Garfunkel’s “Scarborough Fair” in a holy penumbra; it’s unbearably touching and somehow more powerful for not having a singer, even one as gifted as Art Garfunkel.

Perhaps Bamboo’s finest cover is that of Paul Desmond’s “Take Five.” It’s a fantastic version that illuminates and slightly accelerates Dave Brubeck’s famous, sprightly rendition. Like every song here, “Take Five” gains a sheen of freshness thanks to the airy coolness of the shakuhachi, a flute-like instrument popular in Japan. The unexpected robust and rapid drum solo three-fifths of the way in is a nice homage to Brubeck drummer Joe Morello.

Minoru’s originals rule, too. “Nogamigawa Funauta” is a gorgeous, courtly piece in which Minoru’s shakuhachi wafts and spirals into sacred space, twining around some phenomenal koto ornamentation. (The koto sounds like some magnificent compromise between a banjo and a harp.) “The Positive And The Negative” bears incredibly funky drum and bass breaks, which have made this track a holy grail for hip-hop producers. Lord have mercy, the beats are rotund on this one. Above the irrepressible grooves, shakuhachi and koto engage in a celestial dance, a mellifluous dream soundtrack. The other original, “Soul Bamboo,” sounds like one of the inspirations for DJ Shadow’s mystical-funk masterpiece, “What Does Your Soul Look Like?”

It’s so great to have Bamboo back in circulation at a reasonable price. Don’t sleep. -Buckley Mayfield