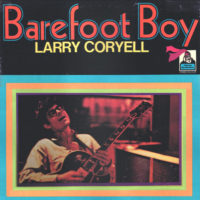 From 1969 to 1975, guitar virtuoso Larry Coryell had a phenomenal run of solo albums for prestigious labels such as Vanguard, Flying Dutchman, and Arista. (His date with German avant-jazz keyboardist Wolfgang Dauner on Et Cetera’s Knirsch LP is essential, too.) During this time, Coryell was challenging hotshots such as John McLaughlin, Sonny Sharrock, Pete Cosey, Ray Russell, and John Abercrombie for jazz-rock-guitar supremacy.

Of all the great recordings Coryell cut in that golden period, Barefoot Boy may be the strongest. At points, it predates the fury and finesse of Miles Davis’ On The Corner by about a year. In 1969, Village Voice critic Robert Christgau called Coryell “the greatest thing to happen to the guitar since stretched gut,” and for a change, I agree with him.

It may take a while to catch your breath after that, but hurry, because “The Great Escape” is gonna make you move some more. It’s a brazen funk cut redolent of the torqued tension of Axis: Bold As Love and On The Corner, with Haynes’ clanging cymbal work accentuating the roiling rhythm. Coryell goes into hyperdrive with thick, corrugated riffs and mercurial, pointillistic runs while Mervin Bronson’s bass line churns lubriciously. Icing this groovy cake, Marcus gets off a Wayne Shorter-esque solo of concise brilliance. Was Miles taking notes?

The 20-minute “Call To The Higher Consciousness” begins with an uplifting fanfare not unlike the one in Pharoah Sanders’ “The Creator Has A Master Plan,” with Mike Mandel’s piano emulating the rolling bliss of Lonnie Liston Smith’s. Marcus takes the lead in the early stages, blowing golden arabesques over a lovely, loping rhythm. Eventually, Coryell emits a flurry of crystalline notes that ripple with mind-boggling fluency. There’s room for everyone to take a solo in this sidelong journey, including Mandel’s gorgeous shower of high-pitched chords and Haynes’ nimble and rugged drum workout. When the group barge back in, they spew a geyser of spiritual-jazz euphoria akin to that heard on Alice Coltrane and Carlos Santana’s Illuminations. After several bursts of febrile joy, the song downshifts into subdued mode in the last few minutes.

Although rarely touted as such, Barefoot Boy belongs in the fusion pantheon, with your Spectrums, your Emergency!s, your Birds Of Fires, etc. -Buckley Mayfield