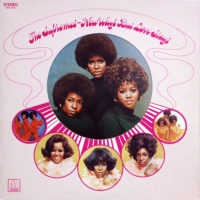 If you abandoned the Supremes after Diana Ross departed the hit-making vocal group, you should reconsider. Start making amends by listening to New Ways But Love Stays, the second studio album with Jean Terrell as their lead singer. Ably assisted by Mary Wilson, Cindy Birdsong, and the Andantes, the Supremes proved they could thrive without their head diva, scoring their biggest post-Diana hit with “Stoned Love” (#7 on the Billboard singles chart), a slice of irresistible soul that’s at once brassy and blissful—a very difficult feat.

See, another reason not to bail on the Supremes sans Ross is that Motown in 1970 was still producing some of the most ambitious and ingenious soul music in the world. I wish I could tell you who’s responsible for the luxurious backing on New Ways, but Berry Gordy was stingy with credits for some unfathomable reason. Frank Wilson produced every song here except one, though, and he deserves plaudits for the maximalist, orchestral excitement happening here. And whoever selected the songs to cover merits a medal.

The album opens with a version of the Spinners’ “Together We Can Make Such Sweet Music.” A love song, uh, supreme, this is sumptuous, busy soul that testifies with intricate vocal arrangements and vaguely psych-rock guitar embellishments. And is that a Minnie Riperton-like wail or synth hijinks at the end? Whatever the case, it’s awesome. A reverent cover of a reverent song, the Supremes’ “Bridge Over Troubled Water” is executed with utmost skill and nuanced feeling. It elegantly explodes when it needs to, although Art Garfunkel still has the ladies beat with that showstopping chorus. I bet Paul Simon was pleased, and not just for the royalty checks.

Doing one of the Beatles’ funkiest and oddest songs, “Come Together,” may seem counterintuitive, but the Motown brain trust and the Supremes made it something special. They made a sitar the lead instrument, surprisingly relegating the bass to the background. It’s pretty funny as well to hear Terrell sing “walrus gumboot” and to ham it up on the “hold him in his armchair, you can feel his disease” line. What goofy fun this is. Speaking of which, the rendition of “Na Na Hey Hey Kiss Him Goodbye” is the album’s peak. I realize you may be skeptical, but hear me out. This accidental jock jam and 1968 chart-topper by one-hit wonders Steam has been transformed by the Funk Brothers into a clap-happy charmer with sitar accouterments, slamming beats, and sax filigrees to fly for. This is DJ gold, and you should see people’s faces when you tell them who’s responsible for it.

Some other highlights on New Ways include the mellow and funky “It’s Time To Break Down,” which hip-hop producer DJ Premier sampled for Gang Starr’s “JFK 2 LAX.” You just can’t deny orchestral soul with that mighty Motown budget behind it. And while “Shine On Me” may be boilerplate Motown upfulness, it bears so much vocal creamy sweetness and is inflated by inspirational horn charts, you may mistake it for a Rotary Connection joint.

New Ways‘ original title and cover caused some controversy within Motown’s offices. Stoned Love was deemed too drug-friendly and the women’s black turtlenecks were considered an endorsement of the Black Panthers, so compromises were made. Weak sauce, Mr. Gordy, but thanks anyway for releasing such a gem.

*The 1991 CD reissue contains a bonus cut of Stephen Stills’ “Love The One You’re With.” -Buckley Mayfield