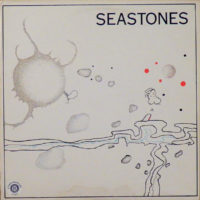 Seastones might be the strangest document to emerge out of the vast Grateful Dead diaspora. From 1970-1976, Ned Lagin was the psych-rock figureheads’ modular-synth guru, a computer-savvy maverick who generated bizarre subliminal electronics onstage and in the studio. Outside of those actions, Lagin composed Seastones from 1971-1974 with help from a lot of the same crew who contributed to David Crosby’s 1971 cult classic, If I Could Only Remember My Name: Jerry Garcia, Phil Lesh, Mickey Hart, Grace Slick, David Freiberg, and Croz himself. But aside from Garcia and Slick’s distorted voices, it’s nearly impossible to detect these prominent musicians’ personalities amid the microcosmic mysteriousness of Seastones.

Lagin classified this record as “Electronic Cybernetic biomusic,” and superficially it resembles the ambient excursions that Brian Eno purveyed in the ’70s and ’80s, Morton Subotnick’s disorienting Buchla synth parabolas, and Gil Mellé’s unsettling Moog miasmas in The Andromeda Strain soundtrack. But parts of Seastones also point ahead to the mercurial glitchtronics of ’90s IDM. Whether artists such as Markus Popp or Alva Noto ever heard Lagin’s arcane opus remains unknown, but the similarities are remarkable.

Seastones is divided into 10 tracks, but the album seems like one organism—or maybe it’s more accurate to say that it flows like a lysergic dream, with subtly changing episodes. Lagin keeps the sonic activity submerged near the ocean’s floor, with most of the vocals appearing to ripple from underwater. While the credits list Garcia’s guitar, Lesh’s bass, Hart’s gong and Spencer Dryden’s cymbals, they’re hard to discern among the synths (ARP, E-mu, Buchla), prepared piano, clavichord, and Interdata 7/16 processor that Lagin deployed to manifest these microbial movements. But you don’t need to know how this sausage was made to enjoy its peculiar flavors.

If you’re the type of Dead fan who thinks American Beauty represents the pinnacle of their career, you’ll likely find Seastones impenetrable, and you can keep on “Truckin’” without it. But if you dig, say, “What’s Become Of The Baby” and adventurous electronic music that nudges your mind to strange, subaquatic realms, you’ll find Seastones an engrossing enigma. Just be prepared to give it many listens—preferably on quality headphones—in order to grasp its crab-like maneuvers.

Important Records reissued a remastered version of Seastones on LP and CD in 2020. -Buckley Mayfield