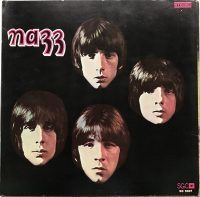 Look at that cover—four heads floating in inky darkness—and try to distinguish the individuals, besides leader Todd Rundgren. Damn near impossible. That’s because Nazz were going for a unified look in haircuts, clothes, and, it seems, even facial features. This Philadelphia quartet basically started in the mid ’60s as a boy band geared for the teen-pandering rags of the time. But the songs on their debut LP were anything but LCD fluff. On the contrary, Nazz is chockablock with stunners of varying styles. Right here, the 19-year-old Todd established his prodigy bona fides with some of the most dazzling work of his long and idiosyncratic career.

Rundgren’s genius smacks you upside the noggin from the first seconds of lead-off song “Open My Eyes.” When I first heard this on the radio as a teenager, I was in a hypnagogic state; I thought it was a cover version of the Who’s “I Can’t Explain” whose weird, supercharged energy had sent the song whirling off its axis. It’s simply one of the most exciting specimens of garage-psych ever waxed. The swerving rhythm, the mind-melting bass and guitar riffs careening around the bend, the handclaps, the cymbal splashes, the flanged vocals on “eyes” and “mind,” Rundgren’s sizzling guitar solo—it’s all too much, and yet you never want it to end. If Nazz had only recorded “Open My Eyes,” they’d still be all-time legends. And yet it only peaked at #112 in the singles chart. I’ve heard this song over 100 times, and each new listen turns me into a hyper ball of hyperbolics.

Despite such a blazing start, the album’s remaining tracks don’t at all seem anti-climactic. I think people underestimate how heavy Nazz were, because “Back Of Your Mind” finds them crafting hooky hard rock with a proto-grunge riff that Mudhoney surely lifted over 20 years later… and about which Blue Cheer must’ve felt jealous in real time, assuming they heard it. Another case in point is “Wildwood Blues,” a proto-glam strut that overtakes the titular blues, like some strange melding of Cream with prime-time Slade, years before the latter rose to prominence. I can imagine the freakout crescendo coda making a young Tony Iommi shout “Cor blimey!” Nazz‘s third-best song on the album, “She’s Goin’ Down,” is another proto-grunge adrenaline-burner with a killer chorus that foreshadows power-poppers Shoes. The action packed into its five minutes is off the charts (literally): wicked zig-zagging dynamics, freewheeling guitar solo, flowery and fiery prog keyboard action, euphoric vocal harmonies, Blue Cheer-like guitar/bass detonation, and a robust drum solo, to boot. The second-best song here, “When I Get My Plane,” aptly soars during the chorus, with the word “plane” extended and falsetto’d to dazzling effect. The dynamics are ingenious, with the build up to the chorus perfectly engineered for optimal vertiginous splendor. Plus, the “ba ba ba”s and “la la la”s are to die for.

Of course, Nazz had a tender, mellower side, too, as anyone who’s heard their most popular single, “Hello It’s Me,” knows. “See What You Can Be” offers complexly harmonic pop that could segue relatively smoothly with a Mamas & The Papas or Turtles deep cut, while “If That’s The Way You Feel” is a sumptuous ballad that strives for a Left Banke baroqueness, but isn’t quite as melodically inviting or subtle as that group. The strings bear a harshness and overbearing desire to knock you out with emotion, although the vocal lead and harmonies are luscious. As for “Hello It’s Me,” I prefer this version over the lusher, more MOR-radio-friendly one Todd issued on his 1972 solo album, Something/Anything? Nazz’s rendition is a lovely, spare ballad bolstered by Rundgren’s crucial vibraphone accents, gorgeous vocal layering, and heart-melting sincerity. “It’s important to me to know that you know you are free/’Cause I’d never want to make you change for me” is a pretty mature and reasonable sentiment for a 19-year-old male songwriter.

In his liner notes, Jon Landau observed, “To listen to the Nazz is to understand immediately what rock and roll is all about. There is an exhilaration and joyfulness to what they are doing which expresses completely the attitude that rock has always sought to express. They play with such finesse and solidity, it amazes me that anything can be so simple yet so complex at one and the same time.” I don’t often agree with a Rolling Stone writer, but Landau nailed it. -Buckley Mayfield