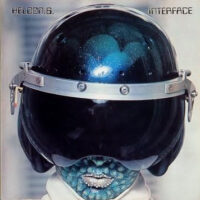 When someone opines that “French music is weak” or some such uninformed blather, you should drop a dose of Heldon on them—specifically Interface, guitar/synth master Richard Pinhas and company’s most devastating platter. There are many other such records from France with which you could hit said ignorami, but Interface‘s payload might be the most effective. The album’s dominated by Moog synthesizer emissions, but there’s nothing trendy or whimsical about these tracks. Interface might be the mother of all bombs from the fecund ’70s French underground.

Pinhas helmed a nearly flawless seven-album run from 1974 to 1978, moving from cosmique Fripp-ian guitar drones and pensive pastoralism to futuristic electronic brutality, peaking in the latter mode on 1977’s Interface—although 1976’s Un Rêve Sans Conséquence Spéciale gives it a run for its laser beams. With their later LPs, Heldon, according to The Stranger, “invented a kind of end-times proto-techno that the French military should’ve enlisted for defense purposes.” Can’t argue with that.

“Les Soucoupes Volantes Vertes”—which was written by drummer François Auger—instantly tingles your nerves and puts you on your toes, prepping you for combat with aliens as it fades in with a throbbing Moog bass, skewed beats, and elasticated Moog III and Moog B riffs. “Which freakin’ planet am I on?” you’ll wonder, as your adrenaline dangerously spikes. On the two-part “Jet Girl,” Pinhas’ obsession with Robert Fripp resurfaces in the form of elephantine guitar wails amid rolling and thumping drums and ominously oscillating Moog bass. The track’s an approximation of a chaotic, cyborgian King Crimson, as cold and terrifying as an Antarctic ice storm.

Bandleader Pinhas lets bassist Patrick Gauthier take the reins for “Le Retour Des Soucoupes Volanes”; it’s some rugged man-machine shit, powered by Moog bass and drums, but with radiant ostinatos around the edges—a weird blend of contrasts. Another showcase for Auger, “Bal-A-Fou” is a spacey tantalizer with unusual percussion timbres and accents that recall Herbie Hancock’s early-’70s groups at their farthest out. When Auger’s drums enter, things build to a momentous tumult. By song’s end, you’re convinced that Heldon should’ve been scoring blockbuster interstellar-war movies instead of John Williams and his ilk. “Le Fils Des Soucoupes Volantes (Vertes)” reprises the opening track’s steamrolling menace, but is even more intense.

All of this great stuff is but a prelude for the pièce de résistance, “Interface.” The mother(fucker) of all dystopian, automatons-dueling-to-the-death epics, it’s a 19-minute ordeal of panned, flanged, and deranged drums, airlock synthesized percussion, pitched-down cymbal splashes, strident guitar anguish, and a Moog bass part so springy it makes you think of trampolines the size of football fields. The way the bass interacts with Auger’s slanted martial beats and manic fills is utterly hypnotic. Every element’s geared to make you feel as if the walls are closing in, the heat is rising, the end is near. Seemingly no one here gets out alive, until… Pinhas ruins the doom-laden vibe with a glammed-up, ’50s-vintage guitar riff in the final 10 seconds. I get the joke, but resent how it disrupts the riveting spell the preceding 18 minutes had cast. “Interface”’s relentless terminal march found an analog in Billy Cobham’s “Inner Conflicts,” even though the legendary fusion drummer claims not to have heard it. Whatever the case, if you crave more of that infernal Heldon vibe, check out Cobham’s unintentional tribute.

Thankfully, Interface rarely falls out of print. The excellent German label Bureau B most recently reissued it in 2020. -Buckley Mayfield