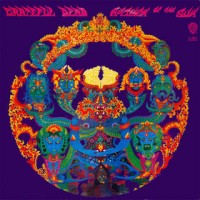 There are very few bands as polarizing as the Grateful Dead, but even their most rabid fans and harshest detractors can agree on one point: The band personified a type of relationship a band can have with its audience. It’s now a model that many bands — especially those of the “jam band” variety — emulate and strive for, and one that is almost taken for granted in today’s fragmented music-consumer culture. It’s easy to forget just how pervasive the Deadhead phenomenon was, especially when it peaked during the final years of the Dead’s active existence. But all parties must come to an end, and when the Grateful Dead (wisely) decided to call it quits after Jerry Garcia’s sad but unsurprising death in 1995, the coliseum and stadium parking lots emptied out, and many Deadheads moved on.

Looking back on this era, it’s clear now that the Dead’s cultural impact often eclipsed their actual music. But as the shows become fading memories for those who experienced them and as a new generation of listeners discover the Grateful Dead, the focus is returning to the band’s rich musical history — where it belongs. Often brilliant, usually at least interesting, and only rarely unlistenable, the Grateful Dead weren’t afraid to take chances, and they adapted to changing times and environments while compromising very little for either. It’s a well-worn cliche that the Dead’s strength was as a live-performance unit. Indeed, a hardcore Deadhead can likely recite the set-list, verbatim, from the second set of a 1987 Alpine Valley show, but if you ask him if the original “Fire on the Mountain” is on Terrapin Station or Shakedown Street, you’re likely to be met with a blank stare.

In many ways, this preference for the live Dead is warranted, but it’s not always justified. The Dead’s natural habitat was onstage, for sure, but even during their best years (late ’60s and early ’70s), their exploratory jams did not always take flight, and they could be sloppy and meandering just as easily as they could be virtuosic and transcendental. Sometimes the controlled environment of the recording studio helped the Dead reign in some of their more excessive tendencies and focus their creative energies into making more cohesive musical statements. The end results of these endeavors varied widely in quality, especially during their later years. And there is certainly no avoiding the fact that the band suffered a critical blow in 1972 with the loss of lead vocalist/organist Ron “Pigpen” McKernan, who brought and took with him an irreplaceable rawness and blues authenticity. Still, most of the Dead’s studio output from all stages of their storied career is at least worth a listen. And now, revisiting their catalog, it’s clear that some of it can even be called essential. So here, for newcomers to the band (or old-timers wishing to explore the more neglected areas of their work), is a short list of some of the Dead’s more notable attempts at conquering the studio LP format, warts and all.

1. Anthem of the Sun (1967) Many fans of ’60s garage rock (this writer included) love the Dead’s raw and hyperactive debut LP (read our review), but devotees of hardcore 60’s psych will take to this follow-up even more. Melding snippets of live performances to effects-heavy studio-recorded material, the band weaves a sonic tapestry that is at once puzzling and mystical. While some slow bits occasionally threaten to bog things down, this early artistic triumph shows the studio Dead at their most adventurous.

2. Aoxomoxoa (1969) Originally to be titled, “Earthquake Country”, this is the Dead’s most atmospheric record. Folksy, quiet, and dark, its songs are subtle and sometimes don’t even seem like songs at all, more like stream-of-consciousness sound poems. On shaky ground with the rest of the band during the recording sessions, Pigpen and Bob Weir’s presence is minimal, making this mostly Garcia’s show. Still, his creaky vocals, coupled with Robert Hunter’s surrealistic lyrics, make for a record that is wonderfully creepy and bizarre.

3. Workingman’s Dead (1970) This is the first release in a pair of career and genre-defining country rock albums. For many, its follow-up, American Beauty, is the best studio album the Dead ever recorded. But most of these folks would agree that Workingman’s Dead comes in a very close second. Possessing a slightly grittier sound than the more polished American Beauty, every track here is a winner. Some of the band’s most popular songs such as “Uncle John’s Band” and “Casey Jones” are here, but it’s the less overplayed tracks that make it one of the greats. Among these fine moments are “New Speedway Boogie”, a commentary on the fateful Altamont music festival (where the band shared billing with the Rolling Stones) and “Easy Wind,” a showcase for Pigpen, who seizes the opportunity to make the most soulful five minutes to be heard on any Grateful Dead studio album.

4. Blues for Allah (1975) The Dead released three studio albums on their short-lived record label in the mid-70s: Wake of the Flood, From the Mars Hotel, and this one. All entries in this “Grateful Dead Records Trilogy” show the band’s growing jazz and fusion influences, and Blues for Allah represents the culmination of this productive experimentation. The Dead had been on hiatus a year before the LP’s recording sessions began, and this seems to have done them a world of good. Pigpen is long gone at this point, but keyboardist Keith Godcheaux is on fire and contributes some of the best work he’s done since joining the band. (And thankfully, the presence of his wife/backing-vocalist, the much maligned Donna, is kept to a minimum.) Featuring the “Help on the Way-Slipknot-Franklin’s Tower” song cycle, a live staple for the rest of the Dead’s career, this is the closest the Dead ever came to bottling their onstage lightning.

5. Terrapin Station (1977) In the late ’70s, the Dead signed with Arista Records, and the label would release the remainder of the band’s studio output during the band’s active existence. Many of these records are riddled with half-baked ideas, unsuccessful attempts at then in-vogue musical styles, and dated production values. Terrapin Station is certainly not immune to these pitfalls, but there’s something very interesting about watching a band, one who for many years avoided the usual machinations of the music industry, try to reinvent themselves as an FM-friendly arena rock act. Even more interesting is the fact that here the Dead sometimes threaten to pull this off! Though dated and overproduced, Terrapin Station is probably the band’s strongest later studio effort, and it still retains a certain charm. Unfortunately, the same cannot be said about the two records that came after it, Shakedown Street and Go to Heaven.

Further listening: Ironically, the Dead had their biggest commercial success with 1987’s In the Dark, long after their creative peak. Though its hit single, “Touch of Grey”, made the band more popular than ever, many early adopters despised the album. To be fair, it did represent a return to form as far as songwriting was concerned, but its production values keep it eternally trapped in the ’80s. If you must hear the Dead’s studio work of this era, it might be worth a listen. But a better route to take is one that stops by the many wonderful solo efforts of the Dead’s individual members. Jerry Garcia’s first LP, 1972’s Garcia (read our review), easily holds its own alongside the Dead’s best work. Percussionist Mickey Hart also recorded some great stuff, and his first album, Rolling Thunder, featuring a star-studded lineup of musicians and vocalists, is a must hear! —Richard P

Did we leave out your favorite Grateful Dead or Dead-related solo LP? We’d love to hear your comments: