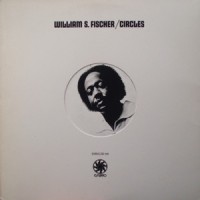 Herbie Mann’s Embryo label may not have had the greatest track record, but it was never less than interesting during its eight-year run, as LPs by Tonto’s Expanding Head Band, Brute Force, Miroslav Vitous, and others, attest. Ol’ Herbie seemingly gave his artists free rein, and most of them took full advantage. One of the Atlantic Records subsidiary’s standout releases is Circles by composer/keyboardist William S. Fischer. Fischer—who doesn’t even have his own Wikipedia page—plays Moog synthesizer on this very curious record, which boasts Billy Cobham on drums, Ron Carter on bass, vocalist Bill Robinson, no fewer than five cellists, and superstar session guitarists Hugh McCracken (Aretha Franklin, Steely Dan, Bob Dylan, John Lennon, Van Morrison et al.) and Eric Weissberg, who played the banjo theme to Deliverance. That’s a helluva lot of firepower for a musician of such (unjust) obscurity. The album’s first track doesn’t really betray how strange Circles will get. “Patience Is A Virtue” is a slow-burning psychedelic-soul number in the vein of Norman Whitfield/Barrett Strong’s “Message From A Black Man,” and given gravity by Fischer’s cello army. But then, catching you unawares, “Saigon”’s acid rock surges somewhere in the vicinity of Jefferson Airplane, Phil Upchurch, and It’s A Beautiful Day’s “Time Is.” If that weren’t enough of a radical juxtaposition, the abstract Moog exploration of “Electrix” sounds as peculiar and disturbing as anything off a Nik Raicevic LP or George Harrison’s Paul Beaver-assisted Electronic Sound. Another 90-degree twist happens with “Chains,” which almost prefigures the nocturnal slowcore rock of bands like Codeine or Low. Nothing on side 1 makes any goddamn sense, and that’s a wonderful thing. Turn the record over for another shocking transition, “There’s A Light That Shines,” a poker-faced pop-gospel ditty sung with utmost sincerity and sweetness by Robinson, but laced with Fischer’s crispy Moog embellishments. It’s the LP’s low point, but its cloyingness is nullified by “Circle.” With its unusual dynamics and dark orchestrations, this song’s excellent funk rock sounds like Chambers Brothers attempting their own Forever Changes. “Green Forever” delivers orchestral funk of David Axelrod-esque complexity, powered by Cobham’s ridiculously mercurial drumming and fiery guitar interplay redolent of Miles Davis’ ’70s-era hired guns like John McLaughlin and Pete Cosey. You have to admire someone who ends a debut album with a track like “Capsule”—a cavalcade of chittering and purring Moog blurts. You have to remember, this synth was rather new in 1970 and musicians were eager to explore its outermost capabilities, sometimes for the sheer novelty effect. Fischer does that here, and if you’re of a psychedelic mindset, you’ll gleefully go along for the whole seven-minute tour de force. Like Fischer’s other albums—Akelarre Sorta and Omen, both from 1972—Circles is long out of print on vinyl although in 2003 Water Records re-released it on CD. It’s one of those true oddball records that need to hit more ears ASAP, regardless of format. -Buckley Mayfield