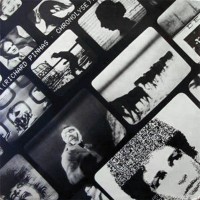 Throughout the ’70s, the French group Heldon forged one of one of progressive music’s most fascinating discographies. Their seven albums never wavered from greatness. The first few largely featured somber takes on languid, Robert Fripp-ian guitar meditativeness and drone tapestries while the last four found the music morphing into a more percussive, infernally throbbing brand of electronic space-rock that sounds like the ultimate score for a harrowing acid trip. (Hear Interface‘s title track for the peak of the latter style.) Heldon were led by Richard Pinhas, a guitarist and synth player enamored of dystopian science fiction and French philosophers. These interests fed into compositions that radiate an intense existential dread, albeit sometimes tempered by passages of eerie serenity and even pastoral bliss.

In Pinhas’ solo career, he muted some of the more horrific elements of Heldon’s output, but in his first LP under his own name (recorded in 1976), Chronolyse, you can still hear the mad scientist in thrall to Frank Herbert’s Dune in its nine tracks, which were done in one take, with Pinhas using Moog 55 modular synth in addition to his trademark guitar and Mellotron. The first seven pieces are relatively short and bear the title “Variations I Sur Le Thème Des Bene Gesserit.” (Wikipedia informs me that Bene Gesserit are “an exclusive sisterhood [in Dune] whose members train their bodies and minds through years of phyiscal and mental conditioning to obtain superhuman powers and abilities that can seem magical to outsiders.”) They consist of insistent, repetitive pulsations that build a sense of great expectation. Think a more primitive and darker-hued version of Philip Glass’ Koyaanisqatsi soundtrack for an idea of the mantric zones explored here.

The 98-second “III” is particularly manic, threatening to spiral out of control, but never doing so. The bedazzled “IV” is a mere 1:45 long, but its momentous, interstellar theme—which many ’90s techno producers replicated, consciously or not—makes you wish it were 10 times longer. “V” also sounds like an embryonic attempt at techno; if its tempo were increased by 30 bpm, it could’ve thrilled the masses at raves worldwide. “VII” would make an ideal score for a sci-fi thriller flick directed by a Stanley Kubrick disciple.

“Duncan Idaho” combines the compressed-air ominousness of “Interface” with the Autobahn-jaunty synths of Kraftwerk and Cluster ca. Sowiesoso—which makes it godly. Last but certainly not least, the 30-minute “Paul Atreïdes” begins with repeated modulated blurts of Moog that recall the pew pews of futuristic weapons in loads of sci-fi movies. These are overlaid with ominous drones that foreshadow some sort of incomprehensible catastrophe. About six minutes in, Pinhas finesses some King Crimson-oid guitar filigrees that arc and wail in great anguish. Then around the 15-minute mark, Heldon drummer François Auger’s odd, quasi-funk rhythm enters earshot, while Pinhas continues soloing on guitar with increasing fierceness and complexity. Toward the end, the piece cycles around to the opening theme, but now with a sense of resignation to accompany the dread.

Of the many records inspired by Dune (which I haven’t read nor have I seen David Lynch’s film, sorry to say), Chronolyse ranks way up there with Bernard Szajner’s Visions Of Dune (recorded under the name Zed). Such is its malevolent power, Chronolyse makes me want to investigate a genre I normally don’t enjoy. -Buckley Mayfield