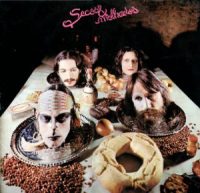 Secos E Molhados recorded six albums, but I’ve only heard this one, their 1973 debut. Because Secos E Molahdos is so great, maybe I don’t need to her anything else by this Brazilian group. Oftentimes, bands peak with their first full-length and their discography becomes a case of diminishing returns. I suppose curiosity will get the better of me and I’ll eventually check out later releases. But for now, Secos E Molhados will keep me sated until further notice.

From the first seconds of the opening tune, “Sangue Latino,” you’re struck by the excellent production values here. Willi Verdaguer’s bass tones have the richness of Dave Richmond’s playing on Serge Gainsbourg’s Histoire De Melody Nelson (pretty much the gold standard, along with anything massaged or thumbed out by Herbie Flowers and Larry Graham), and it contrasts extremely well with Ney Matogrosso’s countertenor, which initially fooled me into thinking he was a woman. Now that I know his gender, Ney comes across as a Freddie Mercury-esque presence on the mic—and one of the best goddamned singers I’ve ever heard.

More proof comes from Matogrosso’s unbelievably gorgeous lead vocal and from João Ricardo and Gerson Conrad’s dulcet backing vox on the acoustic guitar ballad “O Patrão Nosso De Cada Dia.” Even better is the heartbreakingly pulchritudinous “Rosa De Hiroshima,” a sparse folk-rock ballad whose emotional resonance could make a dictator cry. For variation, there are the strutting, rollicking glam-rock of “O Vira” and “Mulher Barriguda” the latter of which boasts strafing harmonica and manic piano, summoning the over-the-top energy of Sweet’s “Ballroom Blitz.”

Secos E Molhados peaks on “Amor” and “Assim Assado.” The former is my go-to Secos E Molhados jam in DJ sets, as it possesses an ascending, sidewinding bass line and vocal harmonies that caress your frontal lobes like the tenderest lover does your nether regions, all while being festively funky. Yes, the erotic imagery is necessary for this almost unbearably sensual song, which stands up to anything by peak-era Os Mutantes. Another DJ favorite, “Assim Assado” is spiced by quirky ocarina motifs (by Zé Rodrix of Som Imaginário), fuzzed-out, Blue Cheer-like guitar soloing, and a melody that arches and curves like a swan’s neck.

“Fala” provides an ideal note on which to close the album—a ballad that gathers momentum and orchestral sweep as it goes, soaring to the vanishing point with the grace and grandeur of a bald eagle. That Dick Hyman-esque synth solo that squiggles into earshot, though, steers the piece toward a surprisingly charming and absurd tangent.

Secos E Molhados isn’t as well known as other classic Brazilian albums by Mutantes, Caetano Veloso, Gilbert Gil, Gal Costa, and Tom Zé, but it deserves to be worshipped just as fervently as those essential documents of South American music. -Buckley Mayfield