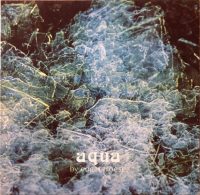 Edgar Froese was on fire in the mid ’70s, both as leader of Tangerine Dream and as a solo artist. For the former, he helmed the super-deep kosmische space-outs of Phaedra and Rubycon, while under his own name he released the ambient classics Aqua and Epsilon In Malaysian Pale. For many people, Aqua was the best work out of all of those classics.

Herr Froese sure knows how to start an album. The 17-minute title track begins with the sound of burbling water, aptly enough, followed soon by a rippling, chirping synth that sounds like a bird panicking in a submarine engine. Right from the get-go it becomes apparent that Aqua is one of those archetypal headphone albums. You need the cans to capture every frosty, frothy detail Froese generates with his keyboard arsenal. (As a bonus, Günther Brunschen applies effects through the “artificial head system.” I don’t know what that is exactly, but it sounds cool as fuck.) As “Aqua” progresses, it really does feel as if you’re floating in gently turbulent waters. Are there planetariums, but for oceans? Well, if there are, “Aqua” needs to be in heavy rotation there. The effect is simultaneously tranquil and troubling—a rare feat.

Things get really deep and ominous with “Panorphelia,” with its bassy synth oscillations pulsing like the vein on a blue whale’s head throughout the whole track, topped by a swirling, Mellotron-like motif that recalls the dramatic tenor of the Rolling Stones’ “2000 Light Years From Home,” of all things. (Did you know that a blue whale’s veins are big enough to allow a small child to pass through them? Just don’t let your kids near them, okay?) Where were we? Oh, yeah, “Panorphelia”: If you want to get the crowd moving (toward the exits, in fear), play this killer jam.

For the 15-minute “NGC 891,” Tangerine Dream member Chris Franke provides Moog accompaniment on this weird, imaginary sci-fi soundtrack that’s somewhere between Tonto’s Expanding Head Band’s “Jetsex” and Gil Mellé’s Andromeda Strain OST. Album-closer “Upland” is a liturgical spasm, sacred music besieged by fibrillating synths that sound like the emissions of grotesque sea life. It’s at once grandiose and unsettling—a hell of a way to peace out of an album.

Unlike a lot of spacey, beatless music, Froese’s flaunts extremely interesting dynamics and timbral fluctuations. On Aqua and many other entries in his catalog, this mensch really takes the listener on a proverbial journey, and it certainly isn’t to anywhere mundane. -Buckley Mayfield