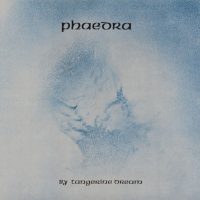 A lot of smart people—and yours truly, too—think Phaedra represents peak Tangerine Dream. With a catalog as vast as this German electronic group’s, you’ll never get a consensus on said peak, but for this blog’s purpose, let’s go with Phaedra.

While I dig the four preceding Tangerine Dream opuses, it always seems like I need stronger drugs to truly understand what the hell’s going on with albums such as Electronic Meditation, Zeit, Atem, and Alpha Centauri. Not so with Phaedra. It’s as if Edgar Froese, Christopher Franke, and Peter Baumann clarified what the group does best and then magnified it to infinity.

The opening sidelong title track is a case in point. It’s a 17-minute masterstroke of oscillations, arpeggios, fibrillations, whooshes, woobs, whistles, and phantom choirs criss-crossing and intertwining across the firmament in dramatic arcs. Ever so subtly, Tangerine Dream’s three VCS 3 synth and Mellotron maestros modulate the sounds to optimize tension and release. I once played “Phaedra” in a large club where I was DJing, and it might’ve been the closest I’ve ever come to feeling like a god.

Side 2—which reputedly was accidentally mastered backward—isn’t quite as momentous, but it is great. The Froese composition “Mysterious Semblance At The Strand Of Nightmares” exudes an enigmatic orchestral grandeur—which explains why it was used in the 2018 film Black Mirror: Bandersnatch. Sounding like a harsh meteorological event transpiring in an aviary by the sea, “Mysterious Semblance” is pretty dang disorienting. “Movements Of A Visionary” offers a menagerie of tantalizing tones and timbres—icicle-tinkling, motorized twittering, Doppler effect arpeggios and drones, etc.—to which any sensible person would want to dose. Finally, Baumann’s piece “Sequent ‘C’” closes the record on an elegiac, haunting note.

Tangerine Dream would go on to do a lot more good work—Rubycon, Sorcerer, Thief, Exit, etc.—but none as stunning as Phaedra. -Buckley Mayfield