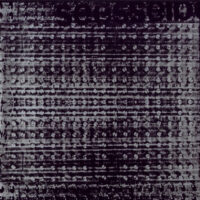 In the early ’70s, Wolf (b. 1941) and Eckhart (b. 1952) Seesselberg self-released some of the most innovative electronic music this side of Conrad Schnitzler and Morton Subotnick, and then vanished in a puff of fried synth circuitry. If you own one of original 1,000 copies pressed, however, you could sell it and travel the world on the earnings.

Thankfully, golden-eared curators have kept the nine precious cuts on Synthetik 1. in circulation over the decades, preserving what sounds like the birth of certain strains of IDM and techno, over 10-20 years before those styles emerged. The Seesselberg bros were clever electronics boffins who built their own synths, which obviously added special sauce to their distinctive sound. These 46 minutes reveal two nerds reveling in the temperamental strangeness of their gear, testing its parameters, and thereby drawing a blueprint for future synth iconoclasts to emulate—assuming they had the keen instincts to find Synthetik 1. and the maverick talent to fuck with its DNA. It is indeed an exclusive cult who have done so.

Synthetik 1. starts spectacularly with “Overture (If Somebody Survives We Will Have A Return Match),” a compendium of burbling, zapping, and oscillating sounds that sets a disorienting tone and warns the listener that Seesselberg are serious about sending you to the craziest quadrants of the omniverse. The 62-second “Eintrachtkreis-Paranoia” is a staccato panic-inducer that resembles the Ronald Frangipane-composed “Fuck Machine” sequence in The Holy Mountain. The equally brief “Verhütungsfreudenwalzer (Kontinenzmusik Für Eine Akademie)” sounds like a computer stuttering a disturbing mantra. These two snippets come off like the brothers playfully fucking about with their equipment. The more focused “Speedy Achmed (Verhaltensanweisung)” offers low-key, sinister pulsations and eldritch screeches that foreshadow Throbbing Gristle and Chris & Cosey. The A-side closes with a nearly 11-minute track bearing an absurdly long German title. Its ominous whirs, distant abattoir emissions, and eerie avian whistles make it a close cousin of Tonto’s Expanding Head Band‘s “Jetsex.”

The flip side begins with Synthetik 1.‘s highlight, “Phönix,” a 10-minute piece Wolf composed for a 1972 film of the same name. It’s a dazzling menagerie of high-pitched synth discombobulations ruptured by pulsating spaceship-door percussion, emergency-warning bleeps, and weaponized drones. I imagine the track scoring the movie’s climactic scenes in which astronauts meet terminal doom. There’s no way anyone gets out of this piece alive. The last two tracks (both with long German titles you’ll instantly forget) reiterate Synthetik 1.‘s m.o.: creating bizarre electronic abstractions that “go nowhere” in the traditional sense that dull people expect them to venture to. Essentially, Seesselberg are all about generating an interesting array of tones for its own sake—escapism with a sense of danger about it.

Some will complain that Synthetik 1. lacks “humanity” or “warmth,” but sometimes it feels great simply to immerse oneself in the alien sonography of custom-built synthesizers and lose all sense of reality. Seesselberg made that scenario a breathtaking certainty nearly 50 years ago. Enter their secret society.

[Synthetik 1. has been reissued officially on CD by Plate Lunch (2001) and on LP by Wah Wah (2013). Both are pricey imports, but totally worth it.] -Buckley Mayfield