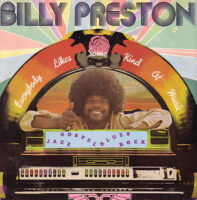 With his inspirational presence and formidable keyboard prowess still fresh in the minds of folks who watched Peter Jackson’s Get Back documentary, it seems germane to review an album by Billy Preston. The late William Everett Preston, as you may know, is the only musician who’s played with the Beatles and the Stones—except for John Lennon, Paul McCartney, Mick Jagger, and Brian Jones. No matter your feelings on those bands, you have to respect a musician who could convince two of the biggest acts in entertainment history to request his services. Add the fact that Miles Davis named a track on Get Up With It after Preston and you have a man with certified legend status.

Aside from his stints with those biggies and other luminaries such as Little Richard, Ray Charles, and the Everly Brothers, Preston created a lot of treasurable music on his solo releases, but his heavy-handed paeans to god and Christianity can grate on non-believers’ nerves. Nevertheless, it’s worth enduring the sometimes cringeworthy lyrical sentiments to hear the dazzling music accompanying them, and Everybody Likes Some Kind Of Music certainly has its share of the latter. The opening title track is a luscious soul mantra that doubles as a banally obvious thesis statement for the album, as Preston leads his band through boilerplate snippets of jazz, rock and roll, gospel, while name-checking “My Sweet Lord” by his buddy, George Harrison, which Bill covered on 1971’s Encouraging Words. Not the most auspicious start, but it gets better… much better.

Moving on, “You’re So Unique” is brash R&B with understated yet urgent propulsion, delivering Sly Stone/Stevie Wonder-esque complexity within a convivial party-jam framework. David T. Walker’s stinging guitar leads lend a freak-rock vibe to the song and Preston’s flamboyant keyboard vamps strut with trademark nonchalance. If you dig rousing gospel romps replete with massed handclaps (bolstered by Preston’s soulful, consoling pipes), “My Soul Is A Witness” will make you want to sprint around your house of worship. “Sunday Morning” (not the Velvet Underground song) possesses a bouncy rhythm akin to the Beatles’ “Ob-La-Di, Ob-La-Da” and is surprisingly buoyed by Dennis Coates’ banjo. “You Got Me For Company” is a well-crafted orchestral ballad, up there with your Nilssons, Van Dyke Parkses, Jim Webbs, and, indeed, your Paul McCartneys.

Speaking of Macca, one of the album’s better deep cuts, “Listen To The Wind” carries faint echoes of the “Blackbird” in its intro before wheeling into a soaring, Rotary Connection-like psych-soul showcase. Speaking of the Beatles, “I’m So Tired” is not the White Album tune, but rather a variation on the triumphant “Space Race” theme (more of which later), with Preston singing with utmost passion and improvisational verve. “I’m so tired of being around people who don’t know their ass from a hole in the ground,” he laments, and who can’t sympathize? The keyboards ripple at absurdly high pitches, and you can imagine Dick Hyman getting jealous of Bill’s nutty tones curlicuing in the stereo field.

On a similar vibe, “Space Race” was a rare instrumental hit (#4 in the US) and one of the exemplars of ambitious ’70s funk. The keybs are practically Gershon Kingsley/Jean-Jacques Perrey-level quirky and timbrally extreme. Every second of this track is crammed with excitement and invention. I still cane this ultimate futuristic driving song and that other far-out Preston instrumental, “Outa-Space,” in DJ sets and can’t foresee ever stopping. They’re aural Ecstasy, without the inevitable serotonin depletion.

Another highlight is “It’s Alright, Ma (I’m Only Bleeding).” At 3:50, it’s about half as long as Bob Dylan’s epic skewering of hypocrisy, consumerism, and bellicosity from 1965’s Bringing It All Back Home. Instead of stark folk-guitar strumming, Preston generates an orchestral-funk dark storm that evokes David Axelrod and Jean-Claude Vannier while singing with a cool stoicism à la jazz hepcats Mose Allison and Ben Sidran. Billy swaps out Dylan’s stern menace and weathered ruefulness for some stained-glass testifying, in keeping with his gospel roots. Consequently, he bestows us one of the most inventive Dylan covers extant.

Honestly, Preston should have ended the album with this song, but instead he tacked on “Minuet For Me,” a short, piano-heavy classical reverie that flexes his strident virtuosity. It’s impressive, but would’ve hit harder near the record’s beginning. Whatever the case, it’s yet one more piece of evidence for Preston’s stunning skills and range. Respect. -Buckley Mayfield