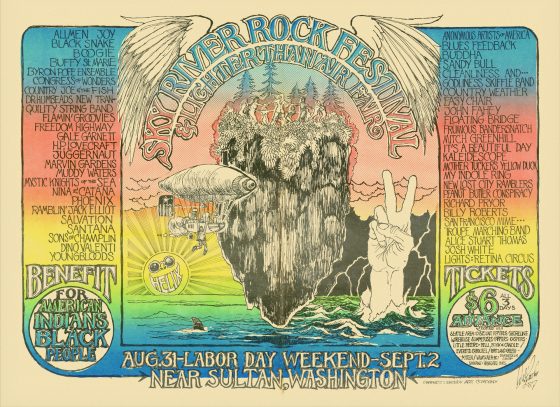 We recently purchased an almost complete collection of Helix Magazines from the generous Jerry Jermann. One issue came with this fantastic wrap-around “Sky River Festival And Lighter Than Air Fair” poster cover. The iconic Walt Crowley is credited with it’s design.  At the time Walt was the art director of  The Helix, who’s staff and friends were mostly responsible for the festival.  Notice the clever way the wrap-around took advantage of the “ split fountain” effect-one that uses two separate colored inks at either end meeting in the middle as a third.  This example is probably the result of pouring four horizontal bands of ink (top to bottom blue/red/yellow/blue).  No matter how it was done, this is one of the best uses of the process we’ve ever seen, and it’s clear Crawley’s drawing was specifically designed with the intention to be printed exactly as it appears.
The festival itself was held Labor Day Weekend, 1968  near Sultan WA in a 40-acre pasture owned by Betty Nelson.  Although we prefer to believe the “Sky River” referred to is some unknown visionary, LSD-fueled floating waterfall  that’s inferred in the illustration, “Sky River” is actually a clever reference to the adjacent Skykomish River.  The “Lighter Than Air Fair” refers to a tethered  helium balloon on site for attendees to rise above the crowd.  In fact, the first balloon flew off by itself before the festival even began.  It took quite a bit of scouting to find a replacement, but one was found in Spokane and hastily made it’s way across the state just in time.  One of Sky River’s organizers,Paul Dorpat, later reflected on the impetus for the festival- The “Piano Drop” that had taken place earlier in 1968: ““We thought if we could do a Piano Drop and get 3,000 people to come into a narrow road near Duvall, we could probably do a festival.”

According to many who attended, the line-up shown in this Helix wrap-around came closest to the actual bill, although ultimately there were plenty of additions and no-shows.  There’s still some inconsistent memories of the performers that actually took part, but we know the Grateful Dead took part (The Grateful Dead’s full set was filmed) and we’ve been told this poster is the closest thing to the final  line-up.  Other acts are certain to have played. Country Joe and the Fish (who had taken part in an earlier event that inspired the festival-more on that later) an unexpected, unscheduled Jam between Big Mama Thornton, James Cotton (who’d supposedly flown up with The Dead) and Billy Roberts-the writer of “Hey Joe”.  The proceeds of the Festival were to be donated to Native American organizations, as well as to the black community. Unfortunately the Festival failed to make a profit and came up short  $5000.  A modest amount, to be sure…but it certainly would have made a profit if all the attendees had paid admission instead of sneaking in.

The weekend was almost completely rain-drenched even though the showers were intermittent.  It’s said that an underground spring began to flow because of the activity.  Before the final act played the crowd is reported to have chanted “no rain-no rain-no rain”  According to the reports of many festival goers the sun finally came out as the festival ended, appropriately with a performance by “It’s a Beautiful Day” It’s believed that this version of the Sky River festival  (there were three in all) was the first organized rock festival held in an open air venue in a rural area.  The much more famous Woodstock Festival would not happen until almost a year later; August 15–18, 1969.  Click here to see it in all its psychedelic glory. More Helix related posts to come.