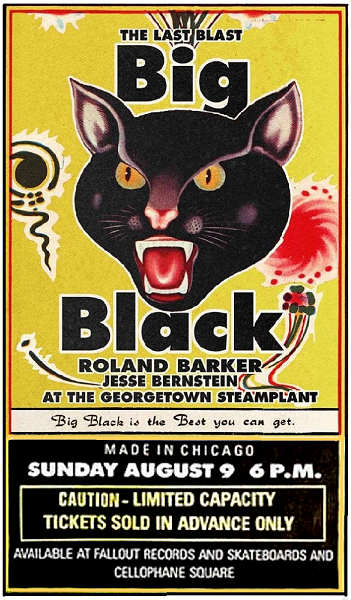 August 9, 1987 was without a doubt one of the high water marks in Northwest music  history.  It was the “last blast” for Chicago’s Big Black, one of the most influential indie bands in the US back then.  The band was led by Steve Albini who would go on to be the engineer/producer of some great records, including ones by The Pixies, The Jesus Lizard, Cheap Trick, Nirvana and The Stooges.  In 2004 Albini estimated he has engineered or produced over 1500 albums.  He’s done scores since then.
The setting for Big Black’s Last Blast was a century-old nformer steam plant near Boeing field in south Seattle.  The steam plant had been abandoned so long ago that it no longer produced electricity-not even the facility itself was electrified. Generators had to be brought in to power the show. The audience stood on the large concrete floor in front of a large riser, or took to the catwalks high above the stage. James Husted and former member of The Blackouts Roland Barker-who would go on to play with Ministry -provided wafting, ethereal sounds as the crowd filed in.  The show itself began with Stephen Jesse Bernstein doing a reading that ended with one of his best lines ever.  The sound was set to echo his final words…This IS music, asshole…This IS music, asshole…This IS music, asshole.

Big Black played what woud (arguably) be it’s last show and they pulled no punches.  They meant to go out with the kind of blast they were known for. None of this improbable scenario at this improbable venue could have taken place without Larry Reid (CoCA’s program director and Administrative director Susan Purves pulling the strings.Larry had somehow finagled his way to become the program director of Seattle’s Center On Contemporary Art (CoCA).  Perhaps “finagle” isn’t the right term.  Larry had been involved in music and art for years.  He was an idea man…a BIG idea man.  With one foot squarely in the art world and the other in punk rock, he managed to bring both together a series of events that included everything from Lydia Lunch and Jim Thirwell leading a discussion on the artist’s responsibiity to society (“none” concluded Ms. Lunch) an early appearance of GWAR-in their full anime- monster gear, “Failure To Discriminate” an animalistic robotic destruction derby by Survival Research Laboratories, the German industrial band Einstürzende Neubauten and notrious performance artists such as Johanna Went and Annie Sprinkle.  The list goes on and on, including readings by William S. Burroughs more from Jesse Bernstien and a show dedicated to RE/Search magazine’s “Modern Primitives” which may or may not have begun the mass popularity of tattoo art by young  Northwesterners.  Along with the “big name” artists CoCA also provided a launch pad for hundreds of local artists and musicians.

Somehow Reid (and later CoCA director, Purves) were able to convince Seattle’s elite and CoCA’s board of directors to fund some of the most outrageous experimental, punk and underground-inspired performances of the decade. Big Black at The Georgetown Steamplant may have been the crown of Larry Reid’s achievements: and he’s had many acheivements.

The poster was a collaboration between Larry Reid and Susan Purves. There’s a bit of a backstory.  The design is unapologetically stolen from the packaging of “Back Cat” a popular brand of Chinese firecracker.  The design pays homage to the fact that the band, Big Black were notorious for ending their shows by blowing up a brick or so of firecrackers.  The company’s by-line “Black Cat is the Best you can get” is changed to “Big Black is the Best you can get” and obviously “The Last Blast” (not part of the original firecracker packaging design) also refers to the use of firecrackers in the show.  The Black Cat brand and it’s logo weren’t nearly as well-known then as it is today.  Perhaps it’s use for the Big Black poster helped make it a bit more recognizable.  We’d like to think so. A host of Seattle’s art and music  personalities were on hand. A pre-Nirvana Kurt Cobain, the aforementioned Roland Barker who would go on to Ministry, Kim Thayil who was playing in an up and coming band called Soundgarden and Mark Arm (Mr. Epp/ Green River/Mudhoney) are usually mentioned as being there, but it’s certain that many unnamed attendees would go on to help shape the legacy Seattle art and music has left the world. Sub Pop’s Bruce Pavitt has called Big Black at The Georgetown Steamplant show his favorite.  Reid himself says;

“In hindsight, this show marked a metaphorical passing-of-the-torch to Seattle as the center of the country’s counterculture”

The show was professionally shot, then edited by Steve Albini himself.  This poster is for the screening of the video.  Their is a similar poster that is similar to this photo except with screening dates at Seattle’s Scarecrow Video
It reads:

Today Larry Reid still has his hand in much of the nexus of Seattle’s art and music scenes. He also manages the flagship Fantagraphics Bookstore not too far from  the site of Big Black’s Last Blast”. Susan Purves went on to be CoCA’s director into the early 2000’s and now works for Bellingham Washington’s Pickford Film Center, a dynamic, multi-dimensional arts nonprofit that is not only involved in film, but culture, education and a showcase for artists of all types.

For a larger version have a look here