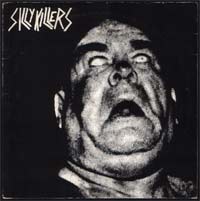 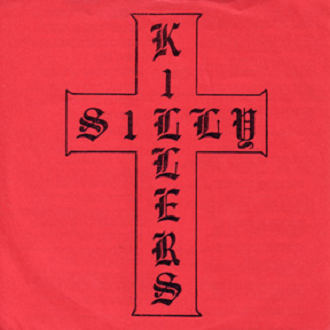 The Silly Killers are one of early 80s Seattle punk bands that would probably be forgotten years ago if it wasn’t for the fact that former Guns N’Roses’ Michael “Duff” McKagen was a member for a short time.  One has to wonder what rabid metal fans would have felt if Duff had continued playing in a multitude of punk bands before becoming famous in one of the all-time most successful metal bands in history; after all McKagen, from a very young age, was one of the most prolific members of early Seattle punk.  Most likely all of his hard work might have been little more than a footnote were it not for relocating from Seattle to Los Angeles-being a footnote is a fate he obviously would not deserve.  But in spite of McKagen’s short time with the Silly Killers, they had already become stars in their own right among Seattle’s punk community. The Silly Killers’ reputation in recent years has also has been heightened by new-found interest in their only 7” recording of what’s usually referred to as the Knife Manual EP, and two other hard to find tracks that have only been “officially” released on the excellent 1983 cassette “What Syndrome” put out by local label Deux Ex Machina Records And Tapes in 1983.

Then there’s Slats (born Chris Harvey) founding member of the Silly Killers who died in 2010 after years of being an iconic figure not only in the punk community, but in the city at large. Despite his ongoing addiction and alcoholism Slats made the rounds two and a half decades as a highly visible character in both Seattle’s University District and on Capitol Hill.  Some worried about him.  Others made bets on how long he would live.  Aside from that Slats was a genial, kind and generous person who had simply found himself in the grips of addiction.  Some friends have reported that he was clean his last few years, but there’s no doubt he was not sober.  You could often find him drinking in one of Seattle’s many musicians’ hangouts-always ready to talk and (what the hell) accept a free drink.  However addiction is in no way a character flaw and it’s clear that many were touched by his legacy…friends who had known him for years, and strangers who had only sighted him from afar.  He was much more than a cast-off.

From the mid 80’s onward Slats was well known for his “uniform”.  Punk-rock (all black) regalia, including skinny jeans and ratted, longish black hair almost always topped by a wide-brimmed hat.  If he never became a huge rock star he was always dressed as if he would be soon…perhaps as a re-incarnation of Johnny Thunders. But the legacy of the Silly Killers goes beyond an iconic figure or a member of rock royalty. The Silly Killers began as one of a handful of seminal second generation hardcore bands that arose in Seattle during the early 1980’s.  It’s might even be misleading to call the Silly Killers “hardcore” since their music and performances did not follow the formula most early hardcore bands did.  The singing of vocalist Eddie Huget could be nuanced instead of a constant, disembodied supposedly traumatized suburban scream.  The songs were actually melodic at times…it might be more appropriate to call the Silly Killers a great little rock and roll band that found it’s place among punk rock.

The band was not above pissing off everyone, including their own fans.  Instead of using the term “pissing off” “taking the piss out of” may be more correct.  Often acting as provocateurs 0n several occasions the band used what seemed to be misogynistic images to promote their shows.  The images drew the wrath of those who didn’t see it as funny or as a stunt to heighten the Silly Killers image in the public eye.   Needless to say, they managed to anger Seattle’s feminist and lesbian communities often.

It’s been reported that in 1982 the Silly Killers were part of the very first punk-rock show in Tacoma, which is about 25 miles south of Seattle.  The bill included The Fartz and Wad Squad (led by the equally iconic Chuck “Upchuck” Gerra).  This claim could be argued, since punk was not new to Tacoma, but it’s also probable that this could have been the first, most visible show of important Seattle bands to do an all-ages show in Tacoma.  Nonetheless the Silly Killers had already made a name for themselves in Seattle,  although often found themselves as the opening act for more well-known local and regional bands.  Despite being largely a support band the Silly Killers had a devoted following and it grew each time they hit the stage.

It was during this era that the Silly Killers recorded their now infamous Knife Manual EP for Kurt Bloch’s No Threes Records.  Kurt was a founding member of The Fastbacks and another highly visible musician-even to this day- on the Seattle scene.  Although the output of No Threes was sporadic during the early 80s Kurt managed to release some of the most classic (and consequently desirable) singles of any local label.  His first four releases (Kill The BeeGees by The Accident,  Man as Hunter by The Cheaters, The Fastbacks debut single It’s Your Birthday and “You May Not Believe In Vains But You Cannot Deny Terror” by Vains-which also featured the near ubiquitous Duff McKagen. No Threes went on to release several Fastbacks records as well as other bands, including Pure Joy, and more recently The Yes Masters and Full Toilet as well as an excellent compilation of the early Fastbacks recordings. No Threes is still active and has also re-issued many of it’s original releases-except, mysteriously, the Silly Killers.

The fact that Silly Killers tracks have been included in several unauthorized bootlegs over the years deprived the original members even a modest amount of royalties.  One of the unauthorized compilations the Silly Killers can be found on is Killed By Death Volume 12 (1996, Redrum Records).  In fact the cover art for this volume is based on the very same image the Silly Killers used on their Knife Manual EP…but then again, they had stolen the image themselves. The photo used on the cover of Knife Manual is that of wrestler turned Ed Wood actor Tor Johnson.  Johnson is probably known best as the hulking figure in both Bride of the Monster (1955) and Plan Nine From Outer Space (1959) as well as a few other Ed Wood films.  But, amazingly, Johnson was also featured in film and television from the big screen musical adaptation of Carousel to television’s Shirley Temple Theater to the Monkees psychedelic outing Head.

There have also been a few legitimate releases of the Silly Killers songs.  Among them is a tip of the hat from later Seattle favorites Gas Huffer.  They contributed their version of Knife Manual in 1992 on a split single with Mudhoney doing a cover of The Angry Samoan’s “You Stupid Asshole”.

The Silly Killers, like most early practitioners of punk never expected to make any money in the first place. They played and recorded for the hell of it, and knowing they’d be entertaining their fans.  They probably never dreamed they would have the status and influence of later generations.  After all, a review in the region’s premier music magazine The Rocket gave it a poor review, and sales of the 7” EP were modest at best.  Today copies are highly prized on the collectors market, but practically impossible to find…one copy recently sold for $200.

The Silly Killers were exceptionally entertaining live. Slats thrashed on guitar while lead singer Eddie  often Huletz feigned indifference when he wasn’t singing.  Both Gary Clukey and  Tim Gowell (now Steven Gowell) played with abandon. The shows could end in chaos (to the glee of audiences) and their set was filled with confrontational lyrics as well as the song titles on their EP which included Sissie Faggots and Social Bitch.  More strident members of the public had no sense of irony and considered the Silly Killers to be misogynistic and homophobic.  Of course it was all provocation as part of their schtick.  It should be noted here that Duff McKagen was not with the band at the time of their recording Knife Manual, but he is credited with “backing vocals” on the song Social Bitch.  By the time the Silly Killers recorded the two songs originally released on What Syndrome (Nothing To Say and Big Machine) Duff had replaced Gowell as drummer.  The band would dissolve soon after that, leaving Eddie and Gary (as well as Tim/Steven) to follow other pursuits while Duff McKagen continued his path toward becoming a rock star-and Seattle hero. As for Slats, he would continue to be a well-known figure in and around the Seattle music scene as well as somewhat of a cultural icon in the city-for decades.  He drifted in and out of bands, or made attempts at forming bands that never materialized and eventually went on to found Pain Cocktail, his final band.  He became a sort of romantic figure of the archetypical rock junkie that became almost de rigueur in some circles…especially in Seattle during the late 80s and early 90s.  Whether being taken seriously as a musician or simply “just another junkie” he was both revered and reviled by students University District where he was considered an “Ave. Rat” who was admired by others.  Later he spent time on the ever-more gentrified Capitol Hill.  “The Hill” still remained an important locale of the music scene and despite being written off  by many who didn’t know him, Slats was always ready to talk to anyone who approached him. According to Ross Beamish a fellow member of Pain Cocktail

“I asked Slats one day if he had seen any of the bullshit people posted online about him.  He just shook his head casually and continued with whatever he was doing. It really didn’t bother him.”

That was typical Slats…living in a world he’d built for himself but ready to engage with anyone and everyone with a respectful deference and kind heart.  In other words Slats was a good guy, despite his failings…and what failings he had didn’t really affect too many others outside of his mother.

In the spring of 2010 Slats fell and had to have hip surgery.  His lifestyle had done quite a bit of damage to his general health and he died from complications of the surgery on March 13, 2010.  There was a more-than-usual outpouring of love from the community for a one-time punk rocker turned professional addict/alcoholic.  His loss was mourned not only by his friends and family, but by strangers who had only had an occassional glimpse of him.  He’s remembered as a kind eccentric, and probably will be referred to for upcoming historians of Seattle music in the future.  But his lasting legacy will also be based on being involved in one 7” chunk of polyvinyl chloride pressed into a Seattle watershed moment.