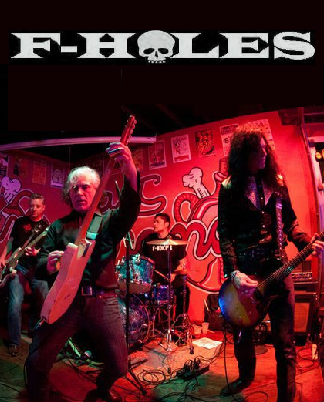 The F-Holes formed out of a jam session on Nov 21, 1984 at The Central Tavern near Seattle’s Pioneer Square. The original members were “Lucky” Tony Mathews, Douglas “Stringtie” Creson and John “Moondog” Mooney. The jam consisted of three songs. The booker was impressed enough to ask them to open for his band, The Alleged Perpetrators on Dec 14, 1984, and a band was born. Since that night The F-Holes have consistently been part of the Seattle music scene.

One night while Stringtie was playing pinball at a tavern with Kevin Heaven (a local musician and well-known scenester)’ Kevin said;“You gotta check out my new f-hole guitar!” Stringtie went home that night and made a poster. He brought it to rehearsal the next day. “We are the F-Holes” he told them.  The newly-named outfit’s drummer, John “Moondog” Mooney asked;“What am I gonna tell my Mom?”

Things changed in 1986 when the F=Holes added Otis P. Otis on lead guitar. He was a huge Johnny Thunders fan and brought a heavier sound that lead the band into the pre-grunge era. The original F-holes sound included generous heaps of Psychobilly, Cowpunk, Garage Rock, Punk, Acid Blues and 60s Psychedelia. They add they also play Country music, though they add

“we’re not sure which country“.

Along with Otis  came a sound that brought the band to a new level and wider audience. They still played the same music as before-only heavier.  Their look was still psychobilly with the big pompadours and cowboy boots and bolo ties.  That would change in later years, but for the earlier part of their career the band was known for their appearance as much as their music.  Both were fun, over the edge and a little bit retro as far as their dedication to punk.

The biggest misconception may be that the F-Holes are a rockabilly band.  It’s a claim the band adamantly deny.  Since the beginning they’ve always played a few rockabilly-tinged numbers, and they often dressed in a style associated with rockabilly.  Still, it’s hard to listen to them without thinking they’re nothing less than a great punk-pop band with the talent to pull off just about anything they throw out to their audience.

Th band is also known for wicked sense of humor.  In 2011 when the magazine Seattle Sinner asked them what their fondest Christmas memory was Creson told the interviewer;

“We played a Buzz Scooter Club party in an abandoned building with 64 Spiders. On the way to the gig we bought a sheet of windowpane acid, 100 hits. At the party we dissolved the acid into the punch bowl. People were drinking kegger cups full of this shit. By the time we finished our set everyone was just flying, wandering around lost on the upper floors like wide eyed zombies. I wonder how many bodies they found when they tore that place down. This was in 1984, back when you hipsters were still crappin’ in your diapers and sucking breakfast out of your mama’s knockers”.


By the mid ‘90s band members drifted into other bands, failed marriages, rehab and dead-end corporate jobs. They played a few uninspired shows, now and again…not really breaking up, just not playing with the same passion and frequency as before.

In 2006 The F-Holes were invited to play Geezerfest at Seattle’s legendary Crocodile Cafe. It was a
showcase of bands that helped create the alternative sound and so-called “grunge” Seattle had become known for in the 1990’s.   These were long-time workhorse bands that had actually developed the sound, others had built their success on, but despite their talent were overlooked getting signed to a big record deals. Along with The F-Holes, the line up included bands like Catbutt, Coffin Break, Swallow, Snow Bud and The Flower People,  Blood Circus, Love Battery, and  other worthy bands.

The F-Holes showcase was so well-received that it led to their playing steady ever since. Now in their 33rd year of rocking their fans remain rabidly loyal, and friends are bringing their kids (and grandkids?) to their shows.

The F-Holes recorded output over the years has been sporadic…in fact there’s been only a few recordings available; but the good news is that they’ll be entering into the studio with Jack Endino in 2018. They’ve also found a newer and younger audience while keeping the old-timers.  An Endino-produced album looks promising.

The Stranger magazine’s Mike Nipper observed that after so many years;

“The F-Holes are, dare I say, a smart and (ahem) “songwriterly,” kickass punk group, and live they’re driving as a mofo”.

Even more fitting, on their website the F-Holes simply say “Totally Skankin’ since 1984”.

2 comments on “THE F-HOLES”